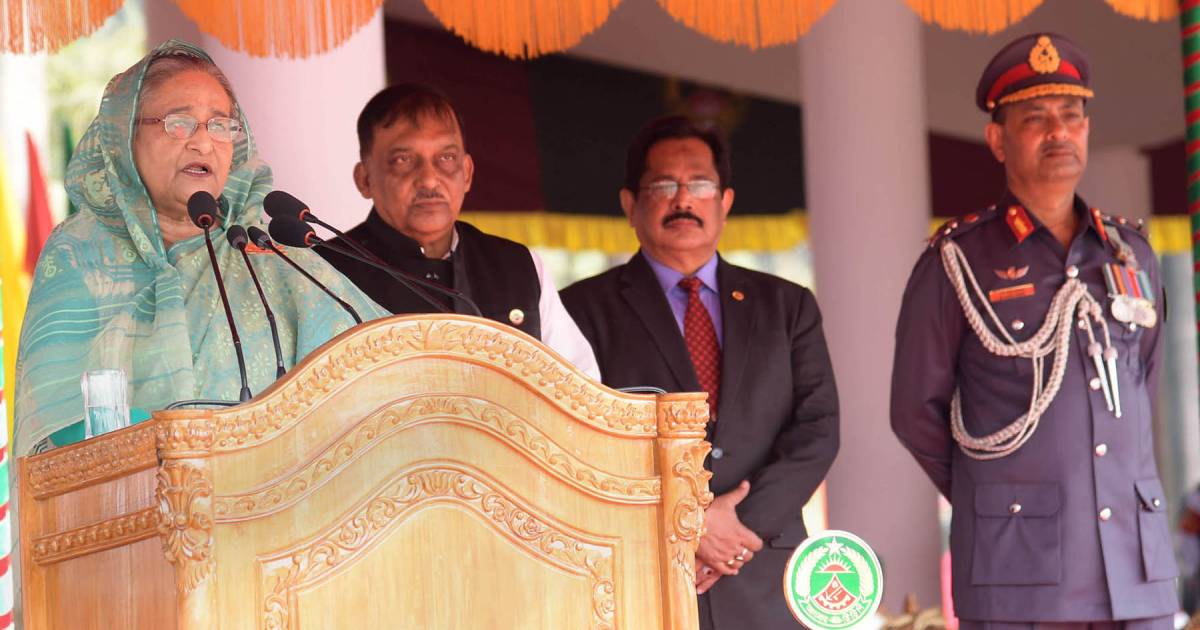 “We hope you’ll work with honesty, courage and sincerity to defeat evil forces for ensuring public security,” she said at the 40th national rally of Bangladesh Ansar and VDP at Bangladesh Ansar-VDP Academy in Shafipur, Gazipur.

Sheikh Hasina asked the Ansar and VDP members to contribute to the development of the country as Bangladesh has now acquired the capability to move on keeping peace with the world.

The Prime Minister asked the Ansar and VDP, being the largest force in the country, to perform the duties bestowed upon them properly.

“If we all work together, I think, the day is not far away when Bangladesh will be established as a poverty- and hunger-free, developed and prosperous country,” she said.

Mentioning that the government light up every house in the Mujib Year (2020-2021), the Prime Minister said the people of every village can enjoy urban facilities.

Praising the Ansar-VDP members, Hasina said the force has been playing a special role in curbing violence, militancy and extremism alongside performing their duties in different polls, including national elections.

The Ansar members have played a special role during the arson violence by making a significant contribution to protecting rail-lines, she said.

She said there are some 61 lakh Ansar-VDP members and 50,000 embodied Ansar members now engaged in ensuring security to public and private structures and organisations, keeping the wheels of the national economy running.

The Prime Minister said the Ansar members are entrusted with the duty of protecting public security, whenever it is needed in the country. Many Ansar members even sacrificed their lives in protecting the public safety and property, she added.

Hasina said the force has 42 battalions, including two women ones, to ensure the security of the country and localities, and its 16 battalions along with the Bangladesh Army are actively participating in operation and maintaining peace and order in the hill districts.

She noted that the Ansar members are also engaged in ensuring the security (as aviation security) to the airports and the security in diplomatic zones, to diplomats, businessman and important persons of the country.

“The formation of two more battalions are now at the final stage for maintaining security to Rooppur Nuclear Power Plant as well as Mujibnagar Muktijoddha Smriti Complex and Amrakanan,” she said adding that her government formed four Ansar battalions, including a guard battalion.

She said the Ansar and VDP Bank has been set up in addition to introducing risk allowance for the members of the force.

On her arrival at the rally venue, the Prime Minister was received by Home Minister Asaduzzaman Khan and Director General of Bangladesh Ansar and VDP Major General Kazi Sharif Kaikobad.

Earlier, the Prime Minister inspected a parade of Ansar and VDP riding an open jeep and received salute. She handed over eight types of special medal to 143 Ansar and VDP members for their bravery and praiseworthy services.

The Prime Minister also handed over the posthumous medal to wife of late Golam Mostafa.

Sheikh Hasina later witnessed a colourful cultural programme performed by Ansar and VDP members and joined a “Darbar” of Ansar officers and members.