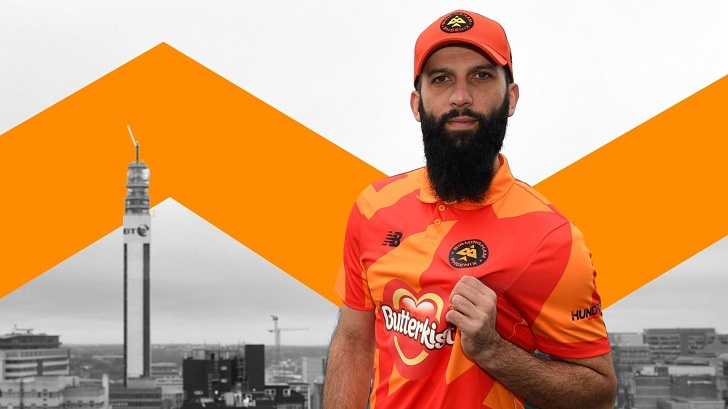 Moeen Ali will captain Birmingham Phoenix in English cricket’s new Hundred competition, it was announced Tuesday.
The England all-rounder, who grew up near Edgbaston, the venue for the Phoenix’ home matches, will lead a side that includes fellow World Cup winner Chris Woakes as well as Kane Williamson, the captain of the New Zealand side beaten in last year’s thrilling global 50-over final.

A dashing left-handed batsman and off-spin bowler, Moeen rose through the ranks at Edgbaston with Warwickshire before establishing himself in county cricket with Midlands rivals Worcestershire.”Every time that I come to Edgbaston it takes me back to some great first memories of coming here at a very young age,” said Moeen in a statement.

Moeen, a practising Muslim, added: “We’re a tight-knit city in Birmingham. We have so much around us that brings the people together, no matter who you are or your background.

“I know how much of a uniting game cricket is and as a leader of the Birmingham Phoenix that is something I definitely want to promote,” explained the 32-year-old, Worcestershire’s captain when they won the 2018 Twenty20 Blast title at Edgbaston.

Phoenix head coach Andrew McDonald, a former Australia paceman, said: “Moeen is a fantastic all-rounder and has the experience and temperament to lead the team.”

Moeen is currently taking time out from Test cricket, having made himself unavailable for England’s tour of Sri Lanka next month, with his last appearance in the format coming in the 2019 Ashes opener against Australia.

His Test absence was part of a wider break from all England duty but Moeen, who still harbours hopes of playing five-day cricket again, returned for the recent third one-day international in South Africa.Moeen was also named player of the match in Durban on Friday after hitting 39 off just 11 balls as England levelled a three-match Twenty20 series with the Proteas that they eventually went on to win 2-1.

The Hundred is a new tournament consisting of eight city-based franchise sides, breaking away from England’s traditional county system.

Teams will bat for 100 balls each with overs lasting for 10 balls and bowlers either bowling five or 10 balls consecutively.

But critics have questioned the need for a fourth format in an already crowded schedule featuring first-class, one-day and Twenty20 matches, while concerns have been voiced over the Hundred’s potentially damaging knock-on effects to the existing county set-up.