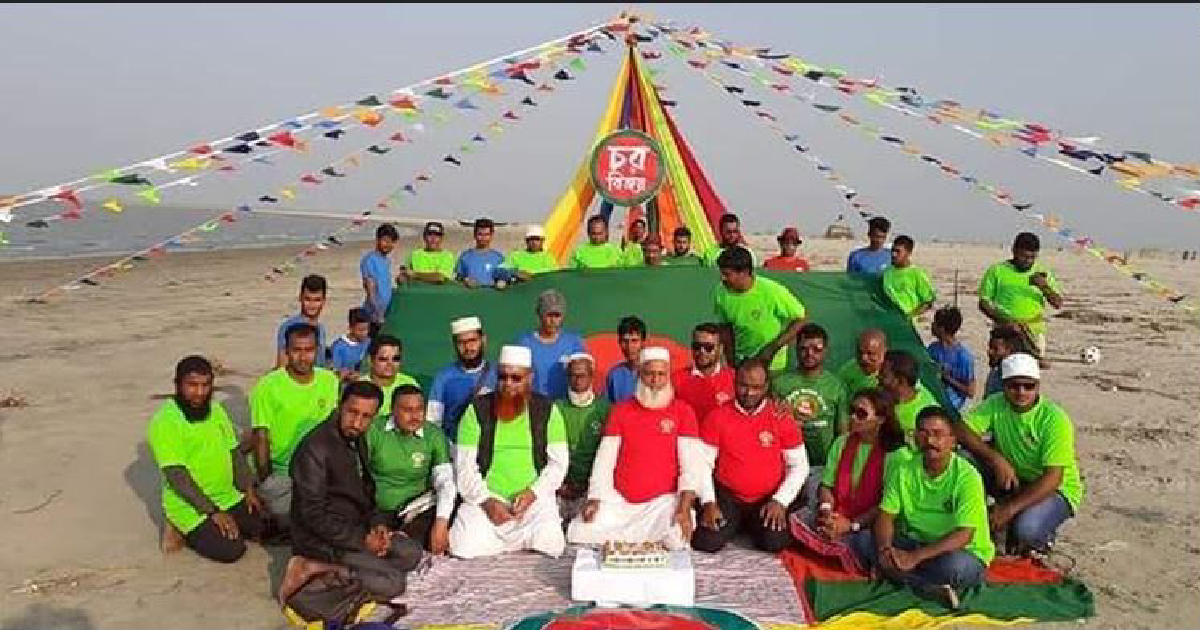 An unhealthy competition between travel agencies and irresponsible behaviour of tourists have endangered the natural ecosystem of newly-emerged island ‘Char Bijoy’ in the Bay of Bengal, about 40 kms southeast off the Kuakata sea beach.

The 5,000-acre island is home to thousands of migratory birds and countless red crabs. When the crabs crawl out of the ground, the entire island seems from afar that it is covered in a red carpet. The flocking of so many birds in the island at the same time gives it a picturesque look.

As the name of this island found traction in mass media, its popularity began to rise and ‘Char Bijoy’ added a new dimension to the tourist attraction of Kuakata.

As more and more tourists arrive at Kuakata, the local travel agencies have resorted to an unhealthy completion to take as many tourists to the island as possible. The absence of any directive from the Tourism Ministry about visiting ‘Char Bijoy’ made their job even easier.

With the arrival of so many tourists, the areas inhabited by red crabs and flocked by migratory birds in ‘Char Bijoy’ have come under threat. The unwanted disturbance has shrunk those areas for the crabs and birds while their numbers have also begun falling sharply.

While visiting ‘Char Bijoy’, the irresponsible behaviour of tourists was seen firsthand by the UNB correspondent.

The curious tourists wanting to catch a glimpse of the birds create a ruckus where the avian travellers gather. Not only that, the loud noise from the sound boxes they bring is a constant annoyance for the birds.

Even, the presence of red crabs has fallen as tourists walk and stomp over the ground where the crabs live.

When the island emerged from the Bay in 2017, it created a lot of interest among tourists to see the pristine ‘Char Bijoy’ which was discovered first by fishermen.

The fishermen called it ‘Hairer Char’. On December 23 of that year, the then deputy commissioner of Patuakhali visited the island and proposed the name of ‘Moon Island’ due to its shape.

Since the island was discovered in December, which is known as the month of victory, it was named ‘Char Bijoy’ after local travel agencies and tourists rooted for it.

Later, trees of different species were planted in the island under an initiative, led by Kuakata municipality Mayor Abdul Barek Mollah.

According to Akhtar and Sima, a tourist couple from Dhaka, the ‘Char Bijoy’ is a beautiful gift of nature. The red crabs and migratory birds visiting the island need to be protected to sustain the pristine beauty of the island, they opined.

Some travel agencies in Kuakata have begun enticing tourists to stay overnight at ‘Char Bijoy’ even while the security risk exists. Having been attacked repeatedly by pirates, fisherman Khalilur Rahman said it is not safe to stay overnight at the island in the absence of police protection.

“No tourists will be allowed to spend the night at the island. I’ve already instructed local tourism boat owners not to take tourists to ‘Char Bijoy’ for staying overnight. Legal action will be taken if anyone defies the order,” said Johirul Islam, senior assistant superintendent of Tourist Police (Kuakata zone).

Md Monibur Rahman, Upazila Nirbahi Officer (UNO) of Kalapara, told UNB that prompt measures will be taken to protect migratory birds and red crabs. “Tourists can’t stay in the island at night. Tourist Police have been given instructions in this regard,” he added.