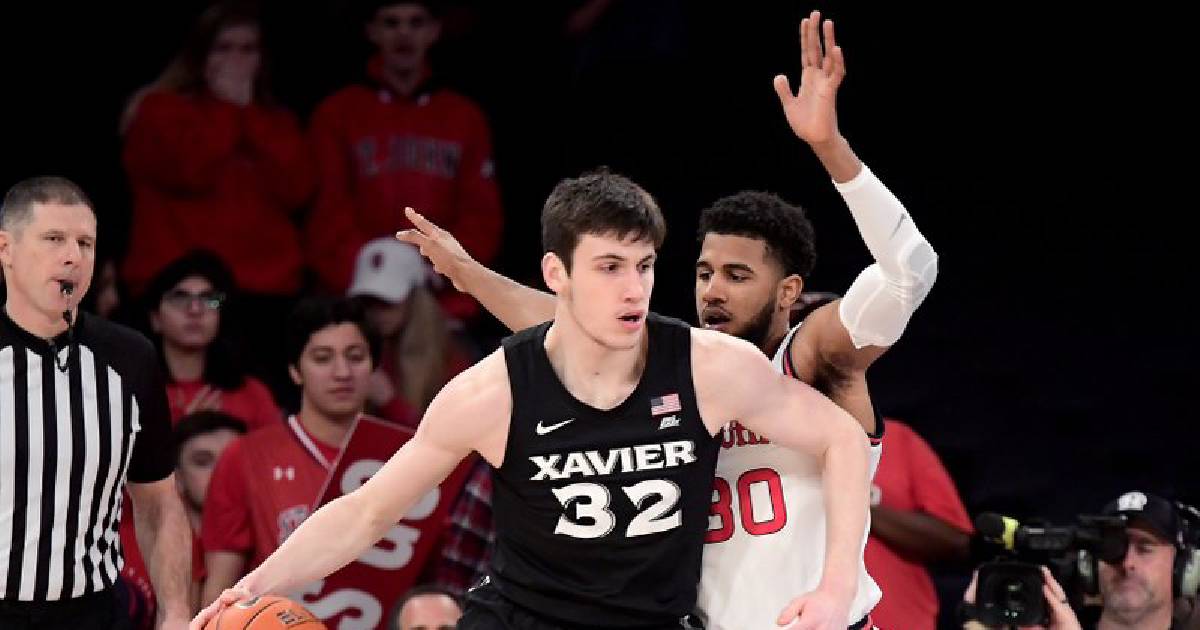 In a game they couldn’t afford to lose, the Xavier Musketeers rallied just in time and got the biggest shot of the night from a freshman.

Zach Freemantle made the go-ahead basket with 10.4 seconds left and added two late free throws as Xavier scored the final eight points to surge past St. John’s 77-74 on Monday.

“We’re very fortunate,” Musketeers coach Travis Steele said. “We did not play well tonight and St. John’s had a lot to do with that. They imposed their will on the game.”

Paul Scruggs had 16 points to lead the Musketeers (17-9, 6-7 Big East Conference) in a victory critical to their NCAA Tournament hopes. Tyrique Jones added 15 points and 15 rebounds for his eighth straight double-double, and Naji Marshall finished with 15 points and 11 rebounds.

Freemantle, a freshman forward from nearby New Jersey, had 11 points and seven boards in his first college game at Madison Square Garden. He took a pass from Marshall and hit a soft shot down low along the left baseline to put Xavier ahead 75-74.

“It was really cool,” Freemantle said. “It was so special to me and I can’t wait to come back. I have always dreamed of playing on the Knicks. Ever since I was a little kid they’ve been my team. I imagined it being a step-back 3-pointer, but I’ll take it like this.”

LJ Figueroa missed a one-hander at the other end and Freemantle sank a pair of foul shots with 1.8 seconds to go. Kyky Tandy blocked Nick Rutherford’s 3-point try at the buzzer to seal it.

The Musketeers swept the season series and won their 11th straight against St. John’s since a loss in February 2015. Xavier, which began the day 39th in the NET rankings and perhaps squarely on the NCAA bubble, has won four of five overall.

“This is huge,” Freemantle said. “A win like this shows that we can stick together through the rest of the season.”

Rutherford scored a season-high 16 off the bench, all but two in the first half.

“We played great for 35 minutes,” Earlington said, “we just have to learn how to finish.”

Figueroa, the team’s leading scorer at 14.9 points per game, was held to eight on 2-for-17 shooting.

Xavier committed 22 turnovers and forced only four but still managed to pull this one out after trailing by seven with seven minutes left.

“Anytime you win on the road with 22 turnovers — I’m shocked,” Steele said. “I will say I was proud of how our guys stuck together.”

St. John’s has split two games since learning senior guard Mustapha Heron is expected to miss the rest of the season with a right ankle injury that will likely end his college career. Heron was the team’s top 3-point shooter and was second in scoring at 13.8 points per game.

Xavier: Three of the final five regular-season games are at home, and Xavier needs to keep winning to avoid missing the NCAA Tournament for the second consecutive season since Steele took over. Before that, the Musketeers earned a No. 1 seed in 2018 and reached the Elite Eight in 2017 under Chris Mack. Xavier will be back at MSG for the Big East Tournament next month.

St. John’s: Once again, the Red Storm held a late lead but were unable to close out a tight Big East game. Five of their conference losses have been by five points or fewer, which has them ninth out of 10 in the league standings.

“Just could not finish the last minute and a half the correct way,” first-year coach Mike Anderson said. “We may be taking some lumps right now, but we’re learning as we go.”

Jones leads the Big East with 18 double-doubles and began the day third in the nation. He is first in the conference in rebounding at more than 11 per game and is on pace to become the first Xavier player since 2003 national player of the year David West to average a double-double for a full season. West was the only Musketeers player in the past three decades to average at least 11 rebounds per game.

Xavier: After playing four of five on the road, Xavier returns home to face No. 12 Villanova on Saturday afternoon. In their Big East opener, the Musketeers lost 68-62 at Villanova on Dec. 30.

St. John’s: A tough road ahead, as the Red Storm close the regular season with five consecutive Big East opponents ranked in this week’s Top 25. St. John’s crosses the Hudson River for a rival matchup Sunday with No. 16 Seton Hall, which rallied for an 82-79 victory over the Red Storm on Jan. 18 at Madison Square Garden. After that, it’s a visit to No. 12 Villanova on Feb. 26.

“We’re coming in the right direction,” Anderson said. “Our kids are playing their hearts out, just not getting rewarded.”