Don't Miss
Home / Bangladesh / PM takes selfies with her sister, daughter in front of a portrait of Bangabandhu 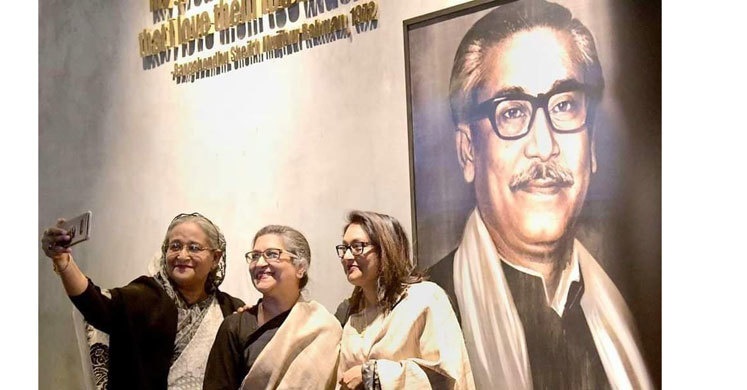 Prime Minister Sheikh Hasina took selfies with her sister Sheikh Rehana and daughter Saima Wazed Hossain in front of a portrait of Bangabandhu while visiting an exhibition on her father the independence hero Sheikh Mujibur Rahman at the Shilpakala Academy in Dhaka on Friday.
The exhibition – ‘Lighting the Fire of Freedom: Bangabandhu Sheikh Mujibur Rahman’ – is being organised on the first floor of the academy’s National Art Gallery along with the Dhaka Art Summit since February 7.

The summit ended after a week but the exhibition on Bangabandhu ahead of his birth centenary celebrations will run through to Mar 31.Different exhibits made Hasina relive memories of the related incidents, the ruling Awami League’s Centre for Research and Information said in a statement.

The two sisters stood clasping each other’s hand while listening to the founding father’s historic Mar 7 speech of 1971 from a video footage at the exhibition.

The academy and the government’s ICT Division assisted the organisers in the exhibition under the supervision of CRI.