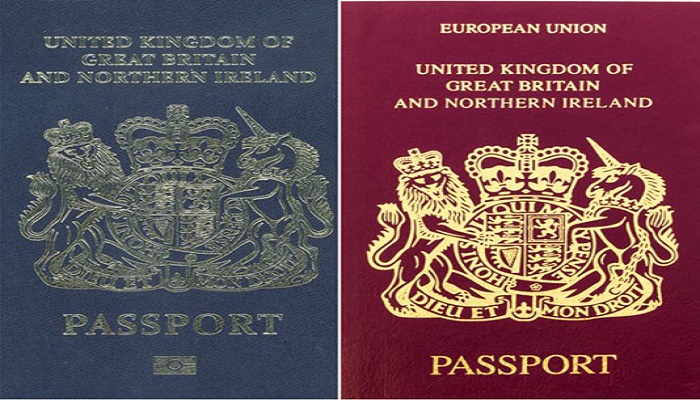 Britain will issue blue passports next month for the first time in almost three decades following its departure from the European Union, the government said on Saturday, reports AFP.
The new blue cover passports will be issued and delivered early next month, said the interior ministry, replacing the burgundy passports that were introduced in 1988.

They are ironically being made in Poland after the contract wascontroversially awarded to French multinational Thales.

“Leaving the European Union gave us a unique opportunity to restore our national identity and forge a new path in the world,” said interior minister Priti Patel.

“By returning to the iconic blue and gold design, the British passport will once again be entwined with our national identity and I cannot wait to travel on one,” she added.

The issue became another battleground of the Brexit war after the

government announced in 2017 it would return to traditional blue passports “to restore national identity”.

The loss of the blue cover was much lamented by some when it was replaced with a burgundy one in line with most other EU nations.The colour change is a return to the original appearance of the British passport, with the colour first used in 1921.

2020-02-22
Mr. Admin
Previous: US researchers use AI to develop powerful new antibiotic
Next: Common sleep disorders you should not ignore