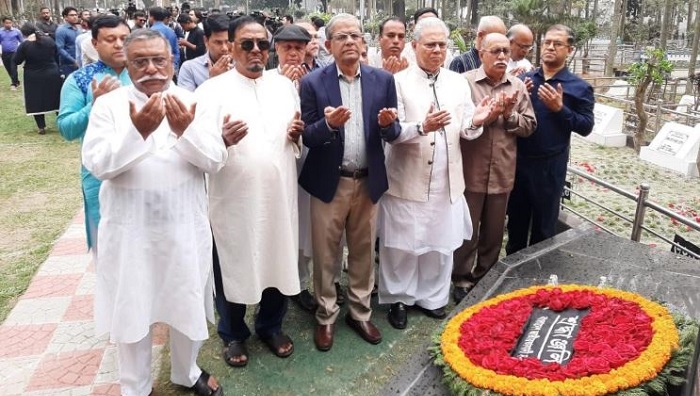 BNP Secretary General Mirza Fakhrul Islam Alamgir on Tuesday said their party, if returns to power, will take steps for the retrial of the 2009-Pilkhana BDR carnage through a fair investigation.
“Those convicted in the BDR-carnage case alleged that the trial was not fair. The full report on the investigation carried out by the Army into the incident was not published. We also think the trial was not fair,” he said.

The BNP leader further said, “We’ll surely take steps for a fair trial of the incident though a neutral investigation if we can get back to power.”Fakhrul came up with the remarks while taking to reporters after placing wreaths at the monument set up at Banani Graveyard in memory of army official killed in the Pilkhana carnage, marking the 11th anniversary of the barbaric incident.

Describing the BDR carnage as conspiratorial one, he said the incident was carried out to demoralise the Bangladesh Army, the symbol of the country’s independence and sovereignty.

“Our independence is now at stake …there’s no democracy in the country. Khaleda Zia, an uncompromised leader of democracy, has been kept in jail unfairly,” he claimed.

Fakhrul together with party leaders and ex-army officials went to the Banani Graveyard around 10:40am and paid homage to the army officials killed in the BDR carnage.

They also offered a munajat seeking eternal peace of the departed souls of the slain army officials.

The nation is observing the 11th anniversary of the atrocious carnage with a heavy heart.

In 2013, a Dhaka court awarded death penalty to 150 members of the erstwhile BDR and two civilians for their role in the massacre.

It also sentenced 161 others to life imprisonment for involvement in the carnage.

In 2017, the High court upheld the death sentence of 139 convicted and awarded life term jail to 185 others.