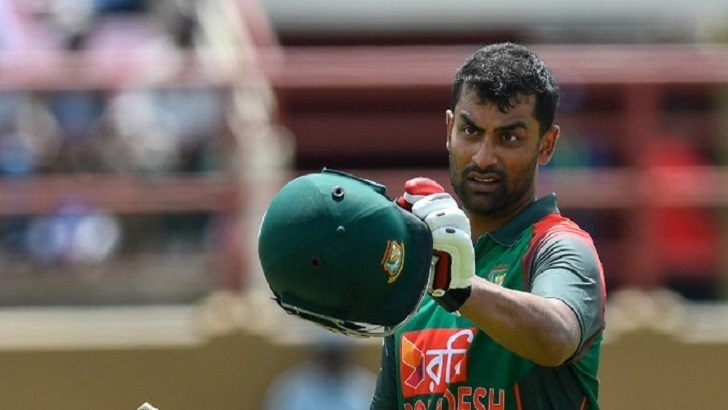 Opener Tamim Iqbal scored majestic 158 off 136 which helped Bangladesh to post 322 for 8 wickets in the 2nd ODI against visiting Zimbabwe at Sylhet International Cricket Stadium today.

After winning the toss Bangladesh skipper Mashrafe Bin Mortaza chose to bat first. Tamim Iqbal and Liton Das post 38 runs in the opening stand before Liton Das being dismissed for 9.

Nazmul Hossain Shanto also departed for 6 following a big mix-up with Tamim over a single.

Tamim and Mushfiqur Rahim added 87 runs in the 3rd wicket stand. Mushfiqur’s was the third dismissal, the wicketkeeper-batsman falling for a 50-ball 55, trying to go for a maximum against young all-rounder Madhevere.

Tamim Iqbal reached 7000 ODI runs and brought up his 12 ODI hundred. The dashing opener made the record for the second ODI against Zimbabwe.

Tamim Iqbal needed 84 runs to touch the milestone with a four of Donald Tripano’s ball in the 27th over. Tamim reached this milestone in 204 innings of 206 matches.

The southpaw added 106 runs in the 4th wickets stand with Mahmudullah Riyad, who fall after scoring 41 off 57. Tamim added 34 runs with Mohammad Mithun in the 5th wicket stand but fall to Carl Mumba scoring his highest 158 off 136 with 20 fours and 3 sixes.

For, Zimbabwe Donald Tiripano and Carl Mumba bagged 2 wickets each while Charlton Tshuma and Wesley Madhevere took one wicket each.