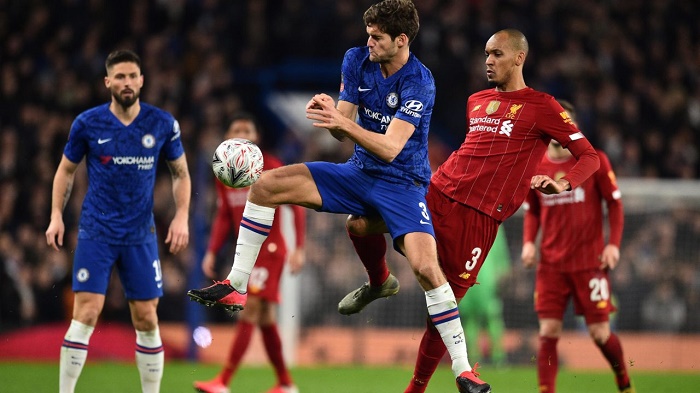 Jurgen Klopp insisted the best of Liverpool’s season may still be to come despite a third defeat in four games saw them crash out of the FA Cup 2-0 at the hands of Chelsea on Tuesday.
Klopp made seven changes to the side beaten for the first time in 45 Premier League games at Watford on Saturday, but still named a far stronger XI than the youthful teams that had seen off Everton and Shrewsbury to reach the fifth round.

However, goals from Willian and Ross Barkley gave Frank Lampard’s men a much-needed lift at Stamford Bridge.“Losing 2-0 is not good, but it is relatively easy to explain. We made two massive mistakes around the goals,” said Klopp.

Liverpool remain well on course for a first league title in 30 years with a 22-point lead at the top of the Premier League, but run the risk of their competitive campaign coming to an early end once the title is sewn up unless they can overturn a 1-0 first leg deficit against Atletico Madrid in the Champions League next week.

“Nobody has to feel sorry for us, we will win football games and that is what we want to do on Saturday.”

A run of five wins in 16 league games and a 3-0 thrashing at home by Bayern Munich in the first leg of their Champions League last 16 tie last week meant the pressure was on Chelsea to keep their hopes of silverware this season alive.

“We are not the Chelsea of different eras gone by with (Eden) Hazard and (Diego) Costa, (John) Terry and (Didier) Drogba, we’ve got younger players but we are trying to bridge the gap upwards,” said Lampard.“I can’t ask for any more in the spirit, work ethic and quality. You have got to defend very well to keep a clean sheet against them.”

Chelsea got the lift they needed from the opening goal as Liverpool’s understudy goalkeeper Adrian undid the good work of a brilliant save from Willian within a minute.

The Brazilian was gifted possession again just outside the Liverpool box and this time Adrian could only turn his powerful drive into the bottom corner.

At the other end, Kepa Arrizabalaga, who had been dropped for the previous five games, showed why Chelsea spent o72 million ($92 million) on him just over 18 months ago as he made three reaction saves in a matter of seconds to deny Mane, Divock Origi and Takumi Minamino what seemed a certain equaliser.

Chelsea then lost Mateo Kovacic and Willian to injury either side of half- time to further deplete Lampard’s midfield options.

But that may provide the opportunity Barkley needs to kickstart his flagging career at the Bridge.

The England international doubled Chelsea’s lead in spectacular style midway through the second half as he galloped forward from inside his own half before smashing past Adrian from outside the area.

Newcastle and Sheffield United also booked their place in the quarter- finals on Tuesday.

A double from Miguel Almiron helped Newcastle to a 3-2 win at West Brom to reach the last eight for the first time in 14 years.

Sheffield United needed extra-time to see off Reading 2-1, but the Blades’ brilliant campaign continued thanks to a winner from captain Billy Sharp.