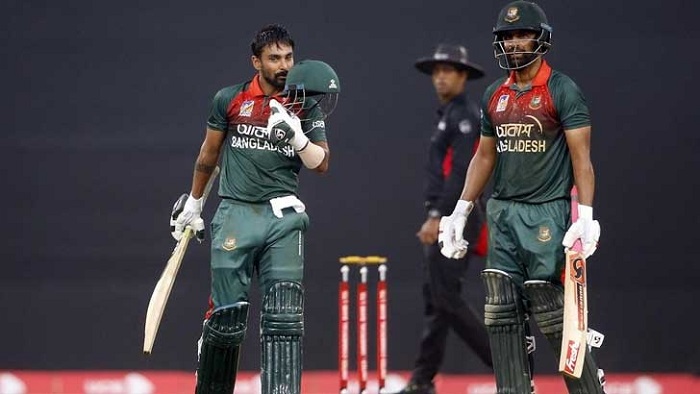 Visitor Zimbabwe were whitewashed after host Bangladesh crushed them by 123 runs in the last and final match of the three-match one day international (ODI) series on Friday at Sylhet International Cricket stadium.
Liton Das struck 176, Bangladesh’s highest individual innings in ODIs, which earned him the man of the match award. Besides, Liton Das and Tamim Iqbal were jointly adjudged as the men of the series.

After Bangladesh posted 322 in 43 overs for three, Zimbabwe’s revised target was set at 342 in 43 overs. The tourists managed to score 218 in 37.3 overs and lost the game by 123 runs.With this win, Bangladesh completed a clean sweep as they won the first two games as well at the same venue.

It was a remarkable victory for outgoing Bangladesh skipper Mashrafee bin Mortaza, in a way his teammates honoured him and paid tributes to their captain.

Sikandar Raza, who played his 100th ODI, scored team highest 61 off 50 balls with five fours and two sixes. Along with him, Wesley Madhevere (42), Sean Williams (30) and Regis Chakabva (34) contributed with the bat, but their efforts were not enough to avoid the clean sweep.

Earlier, riding on the record-breaking knock of 176 by Liton Das, Bangladesh posted 322 runs for three wickets.

Tamim Iqbal and Liton Das posted 292 runs in the first wicket stand which propelled the Tigers to their joint-highest total against Zimbabwe.Liton Das hit 176 of 143 balls which is now Bangladesh’s highest individual innings in ODIs. Along the way, Liton passed Tamim who scored 158 in the previous game.

The 292-run stand between Tamim and Liton in the first wicket stand is now the highest ODI stand for Bangladesh in any wicket third-highest opening stand in the world. They surpassed Shakib Al Hasan and Mahmudullah Riyad who had hit 224 against New Zealand in the Champions Trophy 2017.

Liton ended on 176 off 143 with 16 fours and eight sixes while Tamim remained unbeaten for 128 off 109 with seven fours and six sixes. It was the second successive ton for Tamim in the series.

Rain halted the game for more than an hour after 33.2 overs, and the match was reduced to 43-over aside.

After Liton was removed by Carl Mumba in the 41st over, Mahmudullah Riyad and debutant Afif Hossain fell in quick succession. Mahmudullah posted three while Afif scored seven.

Carl Mumba bagged all three wickets that Bangladesh lost in this game.

Both the teams now will lock horns in a two-match T20I series in Dhaka. The first game of the series will take place on March 9 while the second game will be played on March 11.