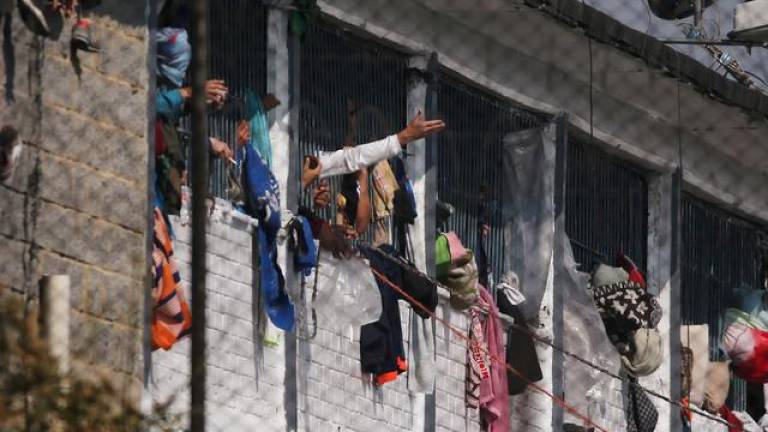 Panic over the spread of the coronavirus sparked a prison riot in Colombia that killed 23 inmates on Sunday, as Chile became the latest Latin American country to announce restrictions on movement.
Rioting swept through the crowded jail overnight in the Colombian capital Bogota amid rising tensions over the virus in the penitentiary system.

Justice Minister Margarita Cabello described the violence as an attempted mass breakout, part of what she said was a coordinated plan with inmates who caused disturbances in 13 jails across the country.The minister rejected accusations by rights groups that the riots were sparked by unsanitary conditions inside a prison system that was woefully unprepared to face the pandemic.

A curfew in Chile “will take effect throughout the national territory from 10:00 pm to 05:00 am the next day,” Health Minister Jaime Manalich announced Sunday. The country, which has 632 infections, registered its first death from the pandemic at the weekend.

Ecuador, which implemented a curfew on Tuesday, marked its highest daily increase in deaths and new cases on Sunday, with 14 dead and 789 affected.

The number of fatalities rose from seven on Saturday at 2200 GMT to 14 on Sunday at 1500 GMT, while the infected surged from 532 to 789, according to the country’s National Risk and Emergency Management Service.

Ecuador has the region’s second-greatest number of deaths after Brazil’s 18.

The news comes as governments in the region are stepping up efforts to try to slow the spread of the pandemic, which has claimed 13,500 lives. worldwideArgentina, Bolivia, El Salvador and Paraguay are among a growing number of countries to impose a total lockdown of their populations.

Colombia will join the group from midnight on Tuesday with a 19-day mandatory lockdown of its 48 million population.

Bolivia’s government criticized sections of the population for ignoring its lockdown on Sunday. “We are not going to do this with a 98 percent lockdown. We are only going to defeat the coronavirus with 100 percent commitment,” Defense Minister Luis Fernando Lopez said.

Venezuelan President Nicolas Maduro on Sunday announced that the country would pay the salaries of employees at small and medium companies affected by the quarantine.

The socialist leader said the measure would begin “in the month of March” but did specify were the funds for his plan would come from.

Unlike other regional leaders, Brazil’s President Jair Bolsonaro has played down the crisis, though the pandemic has left 25 dead in his country, with 1,546 confirmed cases.

State governors have taken matters into their own hands, with Sao Paulo’s Joao Doria ordering a 15-day quarantine that requires a “total closure of non-essential businesses and services” and Rio’s governor closing the city’s iconic beaches.

On Sunday, Brazil’s development bank (BNDES) announced it would inject 55 billion reals ($11 billion) into the economy to counteract the impact of the coronavirus.

The funds will be used to protect more than two million jobs and to finance the suspension of interest payments and direct and indirect loans of Brazilian companies with BNDES for six months, as well as to increase the supply of credit for small and medium businesses.

Brazil’s top football clubs are handing over their stadiums to allow health authorities to turn them into field hospitals and clinics to fight the pandemic.

With football in the country suspended until further notice, more than half the clubs in Brazil’s Serie A have given up their stadiums, as authorities in densely populated Sao Paulo and Rio de Janeiro seek to expand hospital capacity to deal with the crisis.

Mexico City’s authorities Sunday ordered the closure of bars and clubs after being criticized for not taking more forceful measures earlier.

“Every day we can take new measures. These measures have to decrease contacts,” said the mayor, who called on the population to stay at home and keep their distance from other people.

Restaurants are not affected by the order, however.