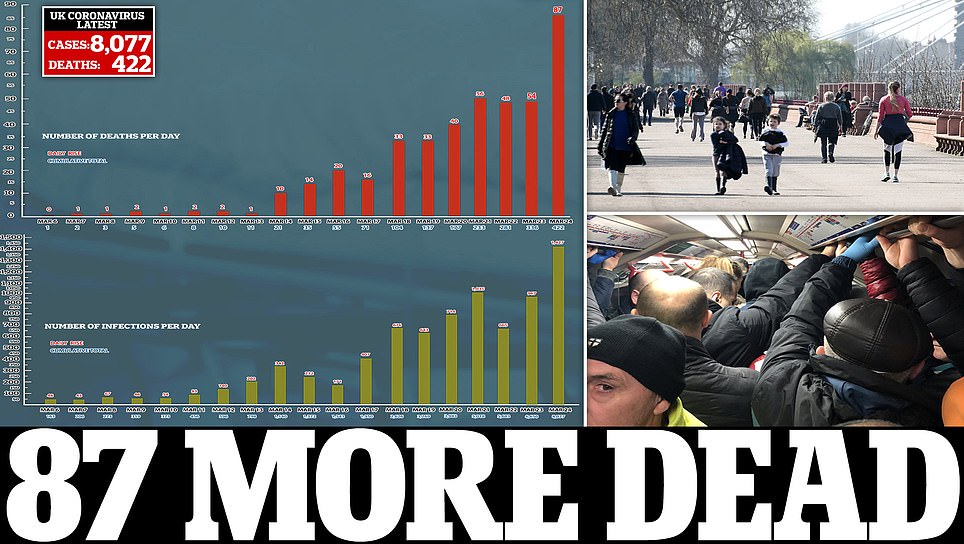 The UK’s  coronavirus death toll has jumped to 422 in the biggest daily rise yet, officials have announced as the crisis continues to spiral out of control.

Eighty-three more patients died overnight in England, including 21 at the one NHS trust in London. Scotland also announced two fatalities, while Wales and Northern Ireland confirmed another death.

In contrast, fifty-five infected Brits died the day before. The UK’s death toll has risen almost six-fold in the space of a week, with just 71 fatalities recorded last Tuesday.

Britain also saw a record spike in cases today, with 1,427 more patients known to have caught the virus as the total number of infected Britons surpassed 8,000.

It comes as police officers were today forced to break up barbecues being held in different parts of the UK as Brits flouted new draconian powers to disperse crowds of more than two to halt the spread of coronavirus.

Health Secretary Matt Hancock today launched a drive for a 250,000 strong ‘volunteer army’ to boost the NHS and stop it being swamped amid the coronavirus crisis.

He said he wanted helpers to come forward to bolster local services – as he also revealed that a new hospital, the NHS Nightingale, is being created at the Excel centre in London.