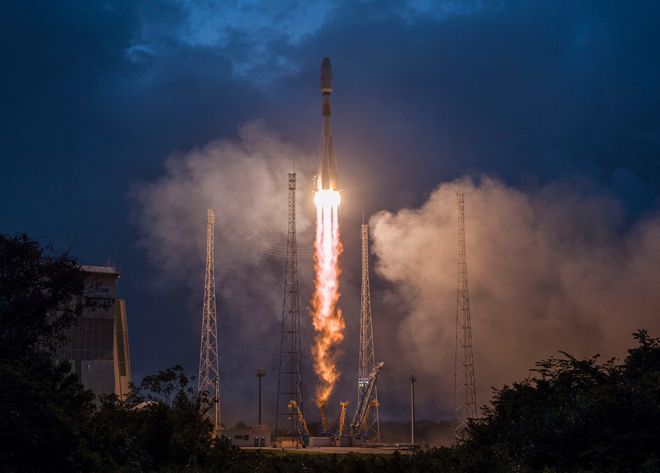 OneWeb, the high-profile London-based satellite start-up, has filed for bankruptcy protection in the US.
The firm, which has been building a network to deliver broadband across the globe, blamed the Covid-19 crisis for its inability to secure new investment.

OneWeb issued a statement saying it was laying off most of its staff while it sought a buyer for the company.The start-up recently launched the 74th satellite in a constellation planned to total at least 648 spacecraft.

The idea is that this network will provide high-bandwidth, low-latency internet connections to any point on Earth, bar Antarctica.

Rumours of a collapse had been swirling around OneWeb this past week. It had raised £2.6bn to implement its project but experts in the space industry speculated that double this sum would probably be needed to complete the system.

The statement released by OneWeb in the early hours of Saturday, London time, said the company had been close to obtaining financing but that, “the process did not progress because of the financial impact and market turbulence related to the spread of Covid-19”.

Virgin Atlantic seeks bailout in coming days
OneWeb increases constellation to 74 satellites
Europe’s telescopes ‘can meet satellite challenge’
CEO Adrian Steckel added: “Today is a difficult day for us at OneWeb. So many people have dedicated so much energy, effort, and passion to this company and our mission. Our hope is that this process will allow us to carve a path forward that leads to the completion of our mission, building on the years of effort and the billions of invested capital.”
OneWeb’s plan was first presented in detail to the media at London’s Royal Institution in 2015.

Some have managed to pull through – the classic example being Iridium, which launched the first satellite phone network. It recently put up a second-generation constellation in the sky.

OneWeb is seeking to do the same. As well successfully launching 74 satellites, it has valuable radio spectrum rights and has built getting on for half of the 44 ground stations needed to operate its constellation. It will hope this progress will prove attractive to a new owner.

OneWeb has been in competition with California entrepreneur Elon Musk’s SpaceX company to build a satellite internet mega-constellation. His rockets are regularly putting up 60 satellites at a time.

If no buyer for OneWeb or its assets can be found, the UK government is ultimately responsible for the 74 spacecraft in orbit.

As the licensing state, it will carry the liability if these satellites are involved in a collision.