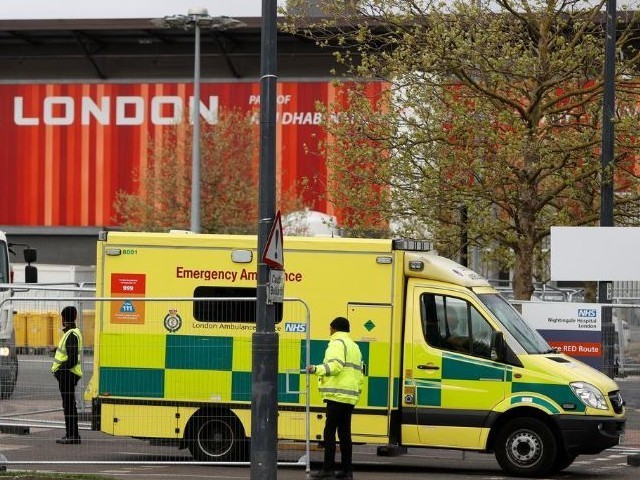 More than 20,000 people have now died with coronavirus in UK hospitals, the Department of Health has announced.

At the government’s daily briefing, the home secretary described the figure as a “tragic and terrible milestone”.

It is 51 days since the first virus-related death was announced in the UK.

At the Downing Street briefing, Home Secretary Priti Patel said: “As the deaths caused by this terrible virus pass another tragic and terrible milestone, the entire nation is grieving.”

She warned that “we are not out of the woods yet”, and said people must continue to follow social distancing measures to curb the spread of the virus.

The government’s figures do not account for deaths that have happened in care homes, at home, in hospices or elsewhere in the community.

These are measured separately by the Office for National Statistics, based on death certificates, and a weekly figure is announced each Tuesday.

Last week that figure indicated that there were at least 1,662 deaths, up to 10 April, that were above the hospital-based number.

The fact we have now passed the grim milestone outlined by Sir Patrick Vallance in less than two months is both a tragedy for the families affected and a worry to the rest of the country.

There are strong signs – at least in hospitals – that we have passed the peak of deaths.

The fact that may have happened without the health service being overwhelmed in the way Italy’s was is at least some good news.

However, the deaths in care homes, which the daily figures from government do not include, are rising rapidly and could prove very difficult to get under control.

In fact, if we included them we would have passed the 20,000 mark some time ago.

On 17 March, Sir Patrick told MPs “the hope” was to keep the death toll below 20,000. At the time the number of deaths in UK hospitals stood at 71. 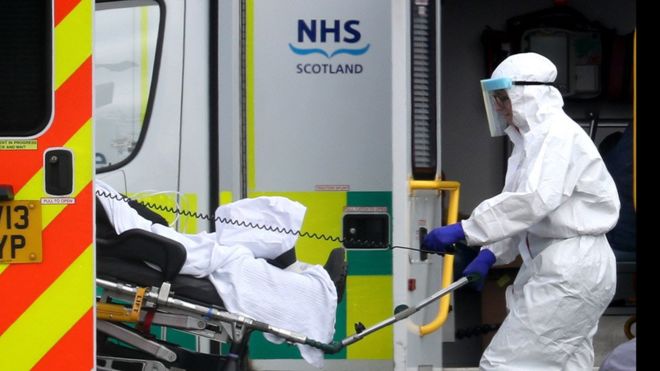 That ambition was later echoed by NHS England medical director Prof Stephen Powis, who said the UK would have ” done very well in this epidemic” if deaths remained below that figure.

Speaking at Saturday’s briefing, Prof Powis said it was a “very sad day for the nation”, adding that his “heart goes out to families and friends of those loved ones”.

Asked about his and Sir Patrick’s previous comments, Prof Powis said: “What we were emphasising is that this is a new virus, a global pandemic, a once-in-a-century global health crisis.

“And this was going to be a huge challenge not just for the UK, but for every country.”

He added that it was unlikely the UK and other countries would recover from the pandemic in the next few weeks.

“This is not a sprint, this will be a marathon,” he said.

Four other countries to date have announced an official number of coronavirus-related deaths exceeding 20,000 – the US, Spain, Italy and France.

Globally, confirmed coronavirus cases stand at more than 2.8m, with the figure of 200,000 deaths expected to be reached imminently.

Ms Patel said the government was working towards returning the UK to normal, but said five tests must be met before lockdown measures can be lifted. “Quite frankly that is not right now,” she said.

Prof Powis said the virus would start to “spread more” if social distancing measures were lifted.

He said it was clear that “gains” were being made by following social distancing rules and orders to avoid non-essential travel. 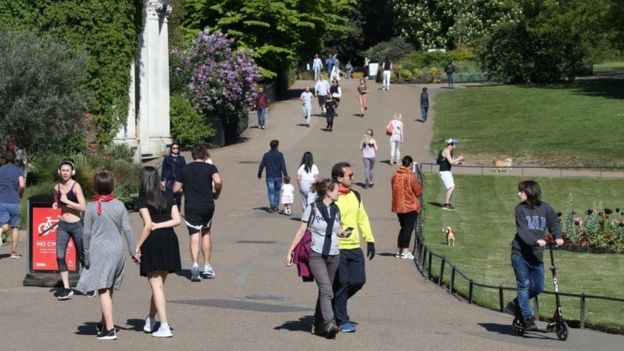 Image caption : Prof Powis urged people to stay at home despite the sunny weather – and said a slight increase in motor vehicle usage was “a little bit” concerning

The latest UK figures include a further 47 death in Scotland, 23 in Walws and 16 in Northern Ireland.

Some 28,760 coronavirus tests were carried out in the UK on Friday. The government has set a target of 100,000 tests per day by the end of April.