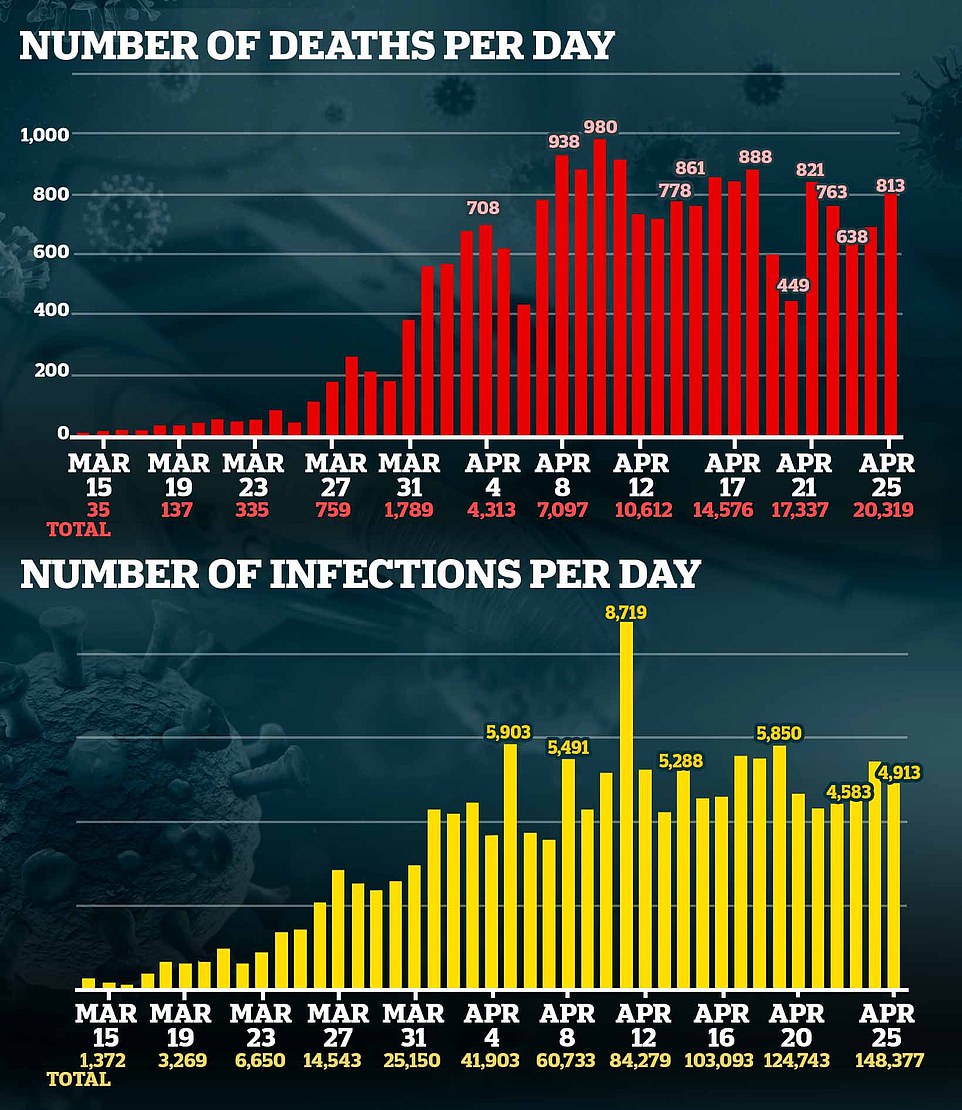 London : The UK’s official coronavirus death toll passed the milestone of 20,000 on Saturday, which the Home Secretary Priti Patel described as “a deeply tragic and moving moment”.

Health department figures showed a further 813 people had died in hospital after contracting COVID-19, pushing the official number of fatalities to 20,319.

The medical director of NHS England Stephen Powis and the UK’s chief scientific advisor, Sir Patrick Vallance, had earlier said that keeping the number of fatalities lower than 20,000 would be “a good outcome”.

“The nation today will be deeply moved by the figures of the number of people who have died,” Patel said during the daily Downing Street briefing. “Every death is a tragedy.”

She added: “This is a deeply tragic and moving moment.”

Saturday’s count was an increase on the 684 deaths reported the previous day and comes after the government claimed the virus had hit its peak.

However, there was some optimism as those diagnosed as having contracted the virus fell by 473 to 4,913, according to the same health department figures.

University of Oxford analysis also showed that the numbers dying in England may be on a downward spiral as it said a third of the 711 additional deaths recorded in the latest government figures on Saturday occurred more than a week ago.

Despite that, the latest figures confirm Britain has been one of the worst-hit countries in the world and the actual death toll could be much higher when deaths in the community are taken into account, particularly at care homes.

The UK government has been under pressure to relax social distancing rules since the country went into lockdown on March 23, but Patel said ministers would not yet give a date for any relaxation in the regulations.

“We’ve made a great deal of progress, but actually we’re not out of the woods yet, we really are not,” she said.

The lockdown was extended on April 16 and is due for review on May 7.

Questions have been raised over shortages in personal protective equipment and a lack of widespread testing, particularly of frontline health and social care workers.

Prime Minister Boris Johnson’s government was also embroiled in a political row after it emerged his chief advisor attended meetings of the main scientific group advising ministers on the coronavirus pandemic in Britain.

Downing Street was forced to deny that Dominic Cummings and another advisor, Ben Warner, were members of the politically independent Scientific Advisory Group for Emergencies (SAGE).

However, following reports in The Guardian newspaper, the government admitted that Cummings had sat in on group meetings.

In a statement, a Number 10 spokesman said: “It is not true that Mr Cummings or Dr Warner are ‘on’ or members of SAGE”, and said they attended meetings “to understand better the scientific debates concerning this emergency”.

The statement added it was “factually wrong and damaging to sensible public debate” to suggest the committee’s advice was affected by the government.

Labour’s health spokesman, John Ashworth told BBC radio on Saturday that his “concern” was “that political advisers have influenced the debate”.

And a former Conservative frontbencher, David Davis, tweeted that “we should publish the membership of SAGE: remove any non-scientist members”.

Meanwhile on Saturday, health officials announced that as many as 5,000 severely ill coronavirus patients could be treated with plasma from people who have recovered from the illness as part of a new approach.