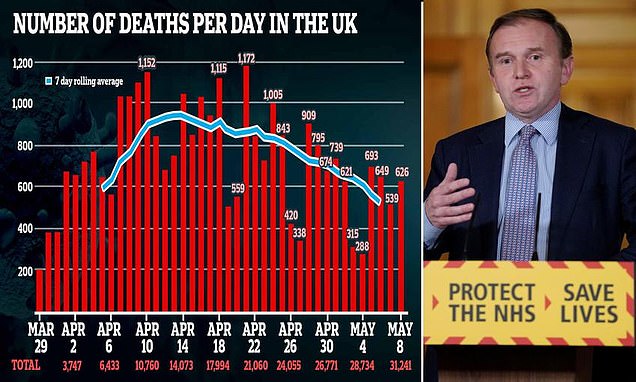 The UK’s coronavirus death toll has risen by a further 626 to 31,241, the government has confirmed.

These numbers include those who died outside of hospitals, including fatalities in care homes.

It comes after health authorities announced 414 people had died in UK hospitals – with 332 new deaths in England, 49 in Scotland, 28 in Wales and five in Northern Ireland.

The government said there are currently 11,788 people being treated in hospitals with Covid-19, an 18% decrease in seven days.

The North West remains the region with the highest number of hospitalised patients.

Today it was confirmed that a six-week old baby had become the youngest victim to die of coronavirus  in the UK.

The baby to have died lost their life on May 3, and would have been born at around the time lockdown was implemented.

The government says less than a third of critical care beds are being used for Covid-19 patients at the moment.

The continued rise in the UK’s death toll comes two days before Boris Johnson is set to address the public to reveal his “road map” to bring the country out of lockdown.

Downing Street has reiterated that the Prime Minister will exercise “maximum caution” when he announces lockdown changes on Sunday.

Mr Johnson’s official spokesman said: “The PM is clear that we are going to adopt an approach of maximum caution.

“I think that is obviously reflected in comments the First Ministers have made in public.”

On the devolved administrations possibly announcing different plans from the UK Government, as Wales announces the first phase of its easing plans including relaxing daily exercise rules, the spokesman added: “The PM has set out on the call (to devolved administration leaders on Thursday) we understand there could be circumstances where there is divergence and when there is evidence that supports it.

The Cobra Covid-19 meeting on Sunday, due to take place before Mr Johnson addresses the nation, will involve the devolved leaders, Number 10 confirmed.

It is not expected that drastic changes will be made to the existing measures, which have been in place since March 23.