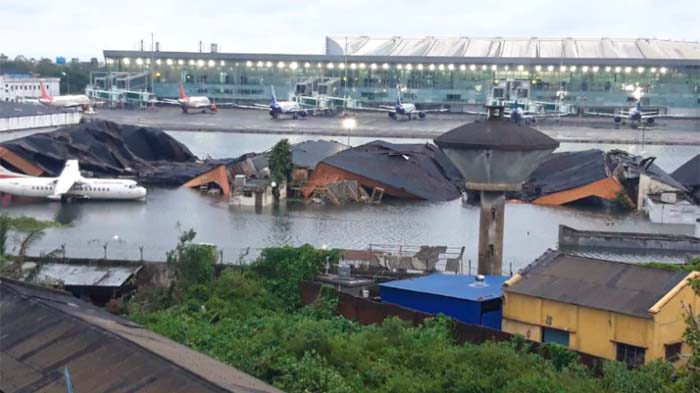 Six hours of Cyclone Amphan’s wrecking winds left Kolkata airport flooded and many structures within damaged. At least 12 people died in Bengal as winds at 120 km/hour and heavy rain left a trail of devastation.
Visuals from the Kolkata airport showed a flooded tarmac, runways and hangars. In one area, the roof seemed to have caved in.

An aircraft was seen in knee-deep water.Two hangars have been damaged beyond repair, but they were unused, according to officials.

All operations at the airport had been shut till 5 am on Thursday.

Only cargo and evacuation flights are operating for now, with passenger flights suspended since March 25, when the country went into lockdown to fight coronavirus.

Amphan slammed into Bengal around 2.30 pm on Wednesday, uprooting trees, damaging power lines and destroying many buildings in Kolkata and other parts of the state. 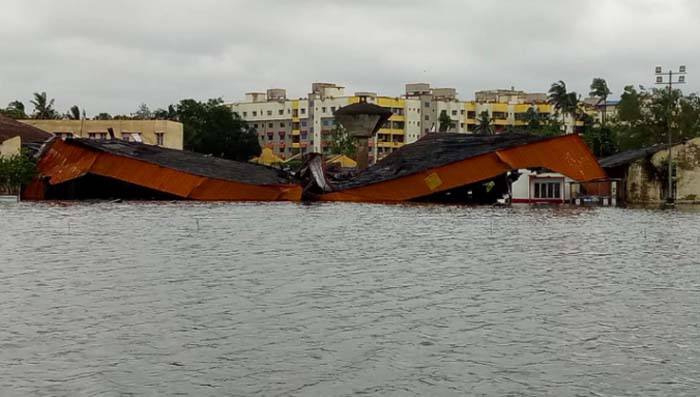 “Sarbanash hoye galo (It is a catastrophe),” said Bengal Chief Minister Mamata Banerjee, who remained in her office during the storm.Mamata said the impact of Amphan was worse than the coronavirus pandemic. She claimed the cyclone could have caused damage worth Rs 1 lakh crore.

“Area after area has been devastated. Communications are disrupted,” said Mamata Banerjee , adding that although 5 lakh people had been evacuated, state authorities had not entirely anticipated the ferocity of the storm.

The cyclone passed mainly over North and South 24 Parganas, Midnapore, Hooghly, and Kolkata.

Cyclone Amphan is the fiercest to form over the Bay of Bengal since records began, and the first super cyclone since 1999, when Odisha was hit by a super cyclone that left nearly 10,000 dead.