Trudeau puts on mask, Canadians urged to do same 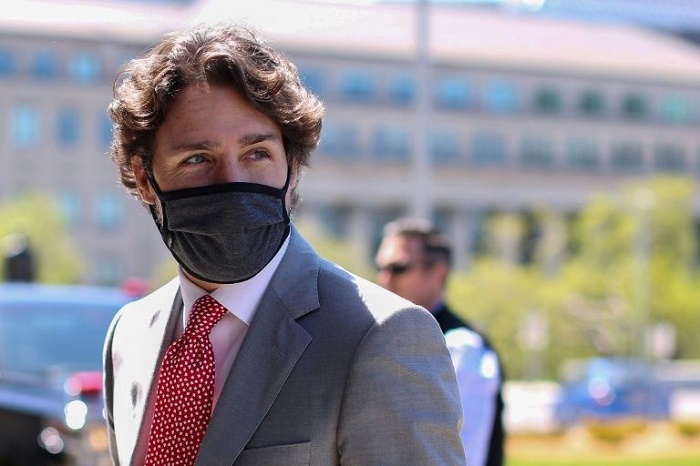 Canadian Prime Minister Justin Trudeau said Wednesday he now wears a face mask in public when social distancing is not possible, as health authorities urged everyone in the country to do the same.
But officials emphasized that wearing masks should not become an excuse to ignore other guidance to limit the spread of the novel coronavirus, including frequent hand-washing and keeping two meters (six feet) from others.

“When it is possible for me to keep two meters distance from people, that is what I prefer to do,” Trudeau told a daily briefing.But he added: “In situations where I’m either walking through the halls of parliament or going to my office and coming in proximity to people, I’ve chosen to start wearing a mask.”

Once at his seat in the House of Commons, where a skeletal crew of MPs have been meeting once a week over the past month, the prime minister said he removes the mask to “engage in parliamentary discourse.”

He then puts it back on when he leaves in case he has to “walk past people and through potentially busy hallways.”

“That’s my personal choice that is aligned, I think, with what public health is recommending,” Trudeau said.

He advised all Canadians to “adjust to what works in (their) circumstances and keep safety at the forefront of what we’re doing.”

Trudeau had been seen wearing a mask for the first time two weeks ago, at a repatriation ceremony for the crew of a navy helicopter that crashed off the coast of Greece.He and his family had self-isolated at home for several weeks after his wife Sophie was diagnosed with COVID-19 in March. She has since recovered.

She also stressed that as authorities begin easing restrictions on gatherings and businesses start to reopen after a two-month lockdown, “physical distancing, hand-washing and cough etiquette must continue.”

“That’s the bare minimum,” she said. “And staying home when sick is a must always and everywhere.”

Her deputy Howard Njoo noted that masks are not intended to protect the wearer, but rather others.

“As more people do go out in the community, you can imagine there’ll be more people on public transport,” he said.

“Some retail stores are beginning to open… and if you can’t predict whether you can maintain that two-meter distance, then it’s recommended that you wear the non-medical mask or facial covering.”

Canada had recorded more than 80,000 coronavirus cases, including 6,000 deaths.