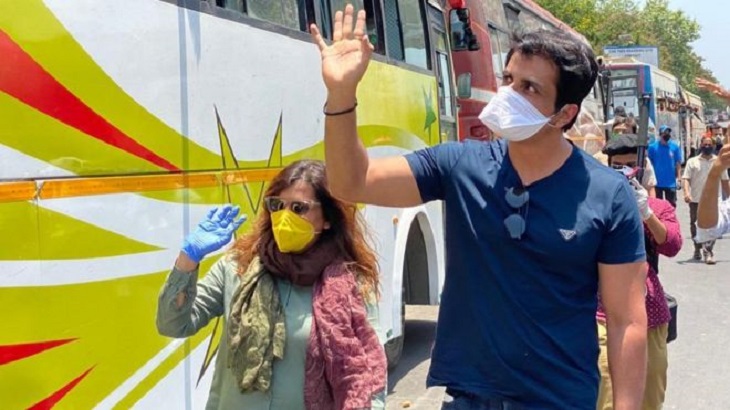 Bollywood actor Sonu Sood, who made his career by playing a mean villain, is being hailed as a real-life hero in India.
Sood has been helping thousands of migrant workers, stranded by the Covid-19 lockdown in Mumbai, return home.

“It gave me sleepless nights when I saw visuals of people walking hundreds of kilometres to reach their villages,” the actor told the BBC.India announced a sudden lockdown on 24 March, leaving migrants in the lurch.

Millions found themselves without jobs or a source of income. And with state borders sealed and trains and buses suspended, thousands of men, women and children were left with no other option but to walk, sometimes more than 1,000 kilometres to reach home.

More than 100 of them have also died – either in accidents or through sheer exhaustion.

Sood, who won prestigious awards for his role as a wily villain in the 2010 superhit Dabangg, has worked with some of Bollywood’s biggest names such as Salman Khan, Shah Rukh Khan, Hrithik Roshan and Aishwarya Rai.

For the past two months, the actor, along with his childhood friend Niti Goel, has been actively involved in helping people impacted by the lockdown.

“We started in March by distributing food, we started with 500 packets of cooked meals and groceries. Today we are distributing food and groceries every day to 45,000 people in slums, those stranded on the roads and those walking on the highways,” Sood told me over the phone from Mumbai.And since 11 May, he has arranged hundreds of buses to take stranded migrants home.

“We were out distributing food on 9 May when we came across a group of people who said they were going to their homes in the southern state of Karnataka,” Sood told me.

“We asked them how would you go? They said they would walk. But it was 550kms so I requested them to give me two days. I said, I’ll make all the arrangements for you to go home. I managed to secure all the permissions in Maharashtra and Karnataka.”

When buses carrying the first batch of 200 people left on 11 May, Sood and Goel were there to flag them off. Before the buses began rolling, Sood broke a coconut on the road – a ritual to wish them a happy journey.

“When they left they had smiles on their faces and tears in their eyes,” the actor said.

Since then, he has helped thousands of migrant workers and their families get to states across India. And requests for help continue to pour in.

“I have been getting thousands of mails and messages on my phone daily from people asking for help. Thousands have also been reaching out on Twitter, Facebook and Instagram,” he says.

“At a time when families are spending time together, we are working 18 hours a day,” says Goel. “We are both getting a lot of flak from our families, but we do it because it has to be done.”

Sood says he feels that he’s “blessed to be a tool of almighty” and sees it as a “rare moment” because he has been given the opportunity to help his fellow beings.

On Saturday, when I speak to him, he’s just heading out to see off 14 buses which will transport 700 migrants to the northern states of Uttar Pradesh and Bihar.

“I feel strongly about the migrant issue because I came to Mumbai as a migrant,” he says. “I just boarded a train one day and landed up here. Everyone comes here with a dream, they want to make their family proud, and everyone should be treated well.”

The Covid-19 migrants who never got home

I ask him how long will he keep sending migrants back to their villages?

“I can’t stop until the last migrant has reached home,” he laughs.

At a time when India is being criticised for its shabby treatment of its poorest citizens, Sood’s generosity has earned him many admirers.

His fans have sent him cartoons depicting him as a superhero and created memes praising his work, and on Twitter, he’s being hailed as a “real hero”:

Sood laughs off all the adulation but says he has one message for his fans, “It’s what I learnt from my parents: if you are in a position to help others, always do it.”

“In times like these,” he says, “every single household needs to cook an extra meal every day because there are lots of poor and stranded people who need your help. And if that happens, we as a country will be able to defeat the coronavirus.”