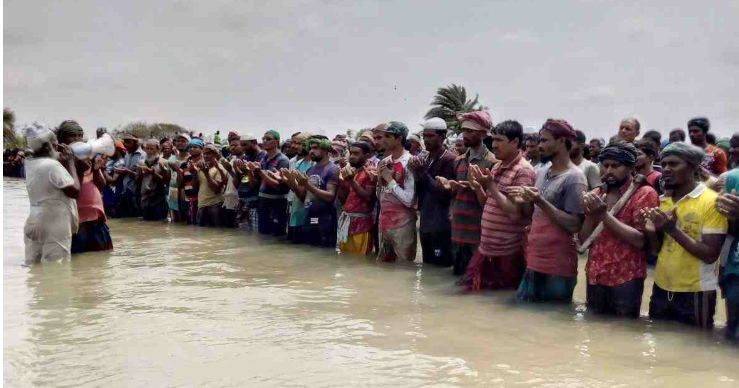 When the people of the country are celebrating Eid-ul-Fitr amid festivity, many residents of the southwestern districts are busy rebuilding their broken houses and embankments damaged during cyclone ‘Amphan’.
At Khulna’s Koyra upazila, the cyclone destroyed embankment and flooded a vast swathe of the area, forcing thousands of people to offer Eid prayers standing in knee deep water.

“Locals tried to repair the embankment voluntarily but failed, and the area is being inundated even during normal tides,” he said.

Thanking the volunteers for participating in repairing the embankment, he sought the Prime Minister’s interference in building a sustainable embankment for survival of the local people.

Cyclone ‘Amphan’ battered the coastal districts of Bangladesh with wind speed of up to 180kph and over 10 feet tidal surges.It inflicted heavy damage to lives, livelihood, agriculture, infrastructures, environment, as well as the largest mangrove forest in the world, the Sundarbans, in southwestern region of the country.

The unusual high tidal surge flooded over 80 percent area and damaged 40km embankment while it broke at 21 points. Crops in over 5,000 acres were destroyed while 5,000 fish farms were flooded.