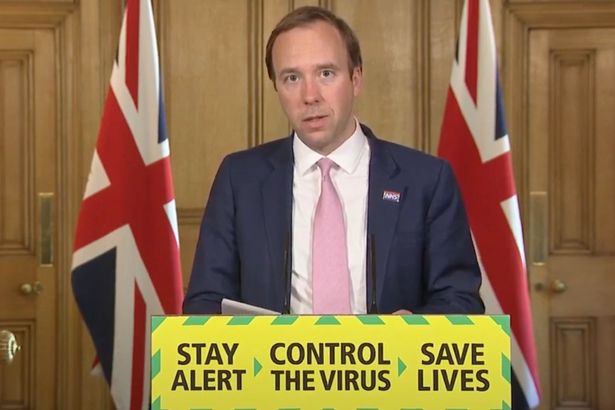 The UK’s official coronavirus death toll has risen by 111 as Brits enjoy the first day of the less strict lockdown rules.

The Department of Health this afternoon said the death toll since the start of the coronavirus pandemic has risen to 39,045.

The recorded deaths took place in hospitals, care homes and the wider community after the deceased tested positive for coronavirus in the UK as of 5pm on Sunday.

The figure was up by 556 from the 38,489 deaths announced on Sunday after 113 deaths were reported overnight into Sunday.

But Health Secretary Matt Hancock said the figures had increased by only 111. The Department of Health later explained the discrepancy. 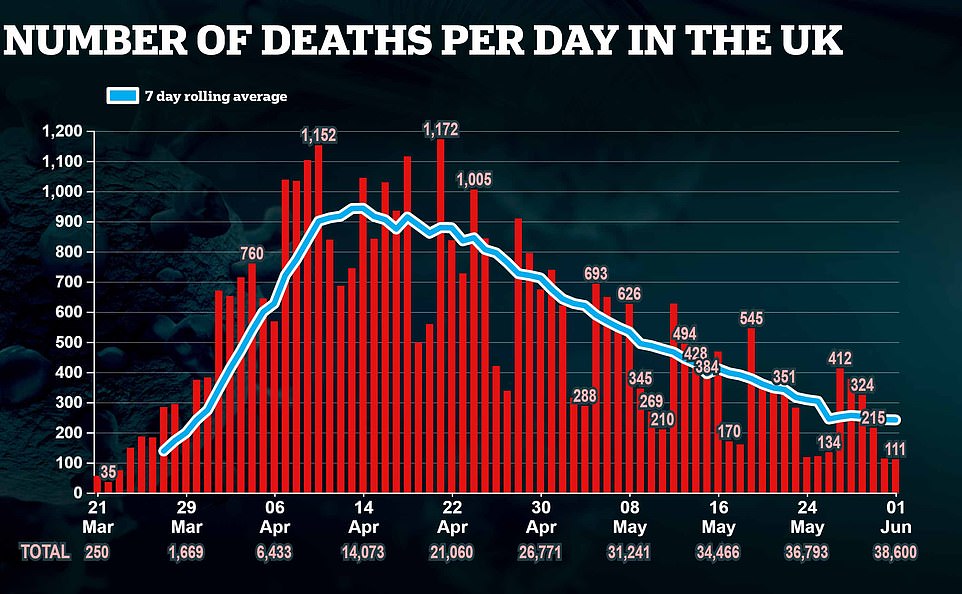 The number of people in the UK who have died after testing positive for Covid-19 is 556 higher than the equivalent total announced yesterday, although the Government is reporting the day-on-day change as 111.

The reason for the difference in these two figures is to do with how deaths are being incorporated into historic data retrospectively.

But since yesterday, 445 deaths have been added to the historic data.

Rather than include these 445 deaths in today’s increase, the Department of Health has incorporated them within the previous cumulative total, to create a notional total for yesterday of 38,934 (38,489 + 445).

The difference between this notional total of 38,934 and today’s total of 39,045 is 111, and this is the one being reported by the Government.

This takes the total to 4.48million tests conducted since the start of the crisis, Hancock claimed at today’s Downing Street daily briefing.

While 276,332 cases have been confirmed positive. 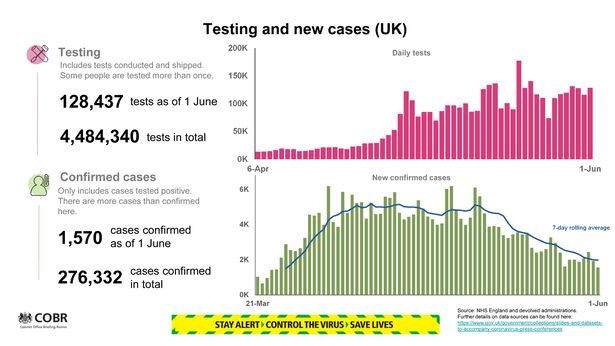 The latest figures showed testing capacity was 206,444 and the Health Secretary said “this shows that there is extra capacity for more tests”.

“Tests are available right now,” he said, directing people to nhs.uk/coronavirus or the 119 phone line.

Hancock said there were 1,570 cases confirmed as of yesterday – the lowest number since March 25.

There are 606 people on mechanical ventilators, the lowest since March.

The latest figures were issued this afternoon and include deaths in all settings such as hospitals and care homes.

Earlier it was announced 115 had died in hospitals in England, Scotland, Wales and Northern Ireland.

Death tolls on Monday are typically lower due to a lag in reporting over the weekend.

In England, 108 more people have died of coronavirus in hospitals, bringing the total number of confirmed reported deaths there to 26,722.

There have been five further deaths in Welsh hospitals, one in Scotland and one in Northern Ireland.

However, there were promising signs today as bosses at 69 hospitals across the country have reported no coronavirus deaths in 48 hours, new data has revealed.

The NHS England data analysed by Oxford University researchers shows more than 57 per cent of UK trusts made the reports.

Meanwhile in London, three hospitals have reported no deaths for an entire week.

The figures were also reflected across the country with just under 10 per cent – 13 hospital trusts – reporting no deaths for the whole week.

The true Covid-19 overall death toll is much higher than official government figures.

The true figure, collated by the Office for National Statistics, is more than 47,300 based on death certificates from England, Wales, Scotland and Northern Ireland.

Some health and scientific experts have broken ranks to warn today’s lockdown easing comes too soon and could risk spreading the virus again.

He added: “Don’t tear the pants out of it, and don’t go further than the guidance actually says.”