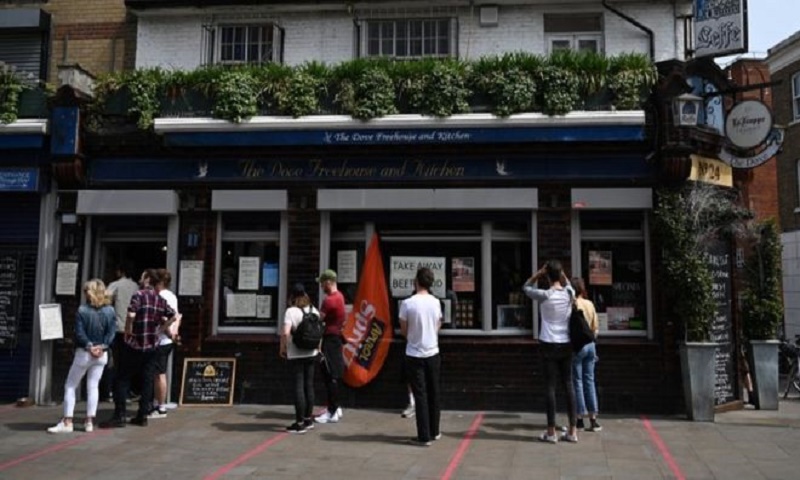 A review into the 2m social distancing rule in England will conclude “within the coming days”, Culture Secretary Oliver Dowden has told the BBC.

It comes amid warnings many businesses will not survive under the current guidance as the government prepares to ease more restrictions on 4 July.

Pubs, restaurants and hotels are among those hoping to reopen.

Pubs could be patrolled and people could be encouraged to use apps to order drinks, according to The Times.

Whitehall sources said the government would update the country on the social distancing rules next week.

It comes as the coronavirus alert level was downgraded from four to three on Friday.

Prime Minister Boris Johnson commissioned the review on 14 June, saying there was “margin for manoeuvre” in the 2m social distancing rule as the number of coronavirus cases falls.

The other nations of the UK have not announced any plans to change the 2m distance. Scotland’s First Minister Nicola Sturgeon has said she is looking at the evidence, and Northern Ireland’s Economy Minister Diane Dodds has said she is open to changing it.

The daily UK update provided by the government on Friday showed there were 173 coronavirus deaths recorded across the UK on 18 June, taking the total to 42,461.

Culture Secretary Oliver Dowden told BBC Radio 4’s Any Questions that the government’s review of the 2m rule will be “concluding shortly, within the coming days”.

His comments came as a raft of measures reported in The Times revealed how parts of the hospitality sector could look significantly different compared to pre-lockdown:

-Tables at restaurants might not be set in advance

Some bars, restaurants and pubs say they will be unable to make a profit if the 2m guidance is still in place when they reopen.

Tourism firms have also warned of tens of thousands of job losses unless the distance is shortened.