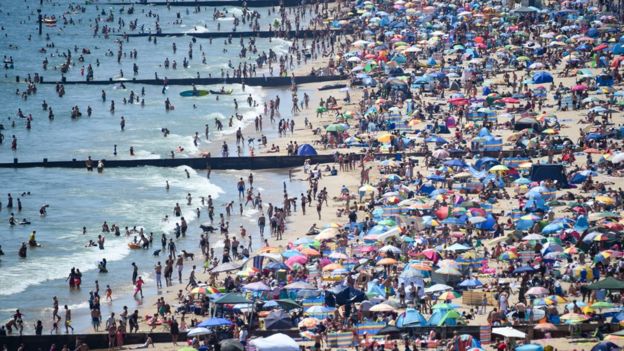 Beaches will only be closed by the government “reluctantly”, Environment Secretary George Eustice has said – after a major incident was declared as thousands crowded into Bournemouth.

Eustice said people needed to work with the government and observe coronavirus guidelines.

Health Secretary Matt Hancock has suggested beaches could be closed by the government if infections rise.

Mr Eustice told BBC Radio 4’s Today programme Mr Hancock had “made clear we do have the powers to go back in and act”.

He added: “We don’t want to do that and we will be very reluctant to do so”.

“We are appealing to everyone who does decide to go to the beach to observe that social distancing and stay within their family,” he said.

He told BBC Breakfast that people have “generally” observed current social distancing rules – keeping 2m apart from other households.
Asked specifically about scenes on the south coast of England, he said: “We just have to recognise yesterday was the hottest day of the year, incredibly hot, a lot of people had the same idea, they all went to the beach, and yes of course those scenes at Bournemouth are a matter for concern.

“The British weather being what it is maybe that will be short-lived and people will return to the type of social distancing they’ve actually demonstrated quite well.”
Bournemouth, Christchurch and Poole Council said Bournemouth beach was “stretched to the absolute hilt” on Thursday, while Dorset Police said there were reports of gridlocked roads, fights and overnight camping.

Sam Crowe, the director of public health at Dorset Council, told the BBC the major incident was a standby measure declared due to an increase in visits to local accident and emergency departments.

He said there were also reports that heavy traffic was making it difficult for ambulances to respond to calls.