14 bodies found by side of road in Mexico 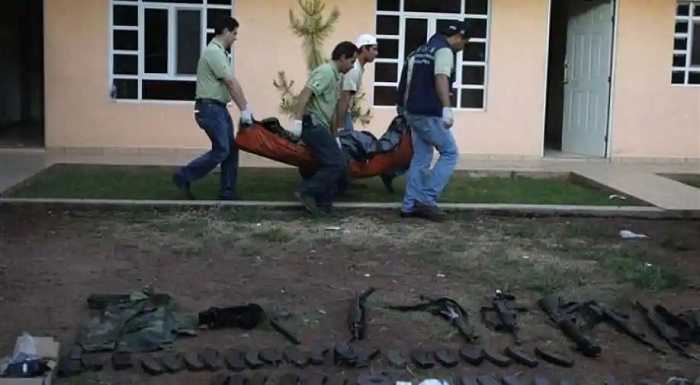 Authorities in Mexico found 14 bodies dumped on the side of a road in northern Zacatecas state, where notorious criminal gangs operate, the regional government said on Friday.

Images on local media showed the bodies by the side of a road, wrapped in blankets and tied with adhesive tape.
Zacatecas public prosecutor, Francisco Murillo told the press that four of the bodies had been identified and were from Juan Aldama, a town 150 kilometers (90 miles) to the north of Fresnillo, where they were found.

“They are people who disappeared from that region a few days ago,” said Murillo.

Zacatecas is on one of the main drug trafficking routes into the United States and, according to experts, the territory is being fought over by at least three local criminal gangs with links to the two most powerful drug cartels in Mexico: Sinaloa and Jalisco New Generation.

On Wednesday a battle between rival Sinaloa factions left 16 people dead in this northwestern state.

Earlier on Friday, Mexico City’s security chief, Omar Garcia Harfuch, was wounded and two of his bodyguards killed in an ambush by gunmen. A woman who was driving past the scene was also killed.

Garcia Harfuch blamed the attack, in which he was hit by three bullets, on the Jalisco New Generation cartel.
Since December 2006 when the then-government launched a military operation against drug trafficking criminal gangs, more than 290,000 people have been murdered, according to official figures.

Experts believe this strategy split up the cartels into smaller and more violent cells.

Despite large parts of Mexico being semi-paralyzed by coronavirus lockdown measures, violence has not abated.

March was the second most violent month since records began in 1997 with 3,000 murders in the country of 127 million.