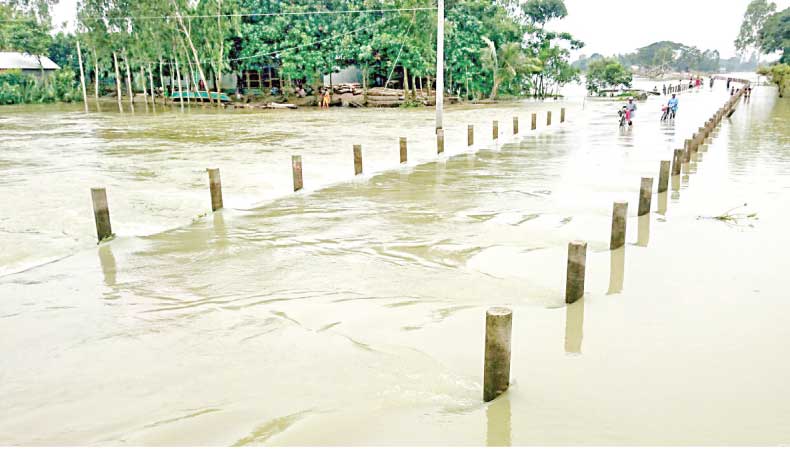 The northern region in the country may face moderate flooding as the major rivers are swelling due to the onrush of water from the upstream across the border in India.

Brahmaputra and Jamuna rivers and their tributaries may continue to rise during the next 10 days, according to FFWC.

The flooding may continues for seven days at best in the low lying areas of the districts, said Arifuzzaman Bhuiyan executive engineer of FFWC.

The Brahmaputra River is likely to overflow at Ulipur and Chilmari in Kurigram on Saturday while the Jamuna may rise above the danger levels at Fulchhori in Gaibandha, Bahadurabad in Jamalpur, Kazipur in Sirajganj, Sariakandi in Bogura, and Elasin in Tangail between Jun 28 and 29.

The low-lying areas in the districts may face flashfloods, said Arifuzzaman.

The Padma River is likely to flow above the danger level in Bhagyakul and Goalanda, leaving Munshiganj and Rajbari susceptible to floods.

The water level in the rivers around Dhaka is also rising although these are unlikely to overflow, according to FFWC.

Water level of the Teesta River in Nilphamari district is flowing above the danger level following heavy rainfall and onrush of water from upstream.

According to the source of Flood Forecasting warning Center of Water Development Board, “Water level at Dalia point of the Teesta River was flowing 20cm above its danger mark at around 9am on Friday.

The low-lying areas in Jaldhaka and Dimla upazilas have been flooded due to rise in water level of the river.

Meanwhile, all water gates of Teesta Barrage have been kept open to control the flow of floodwater.