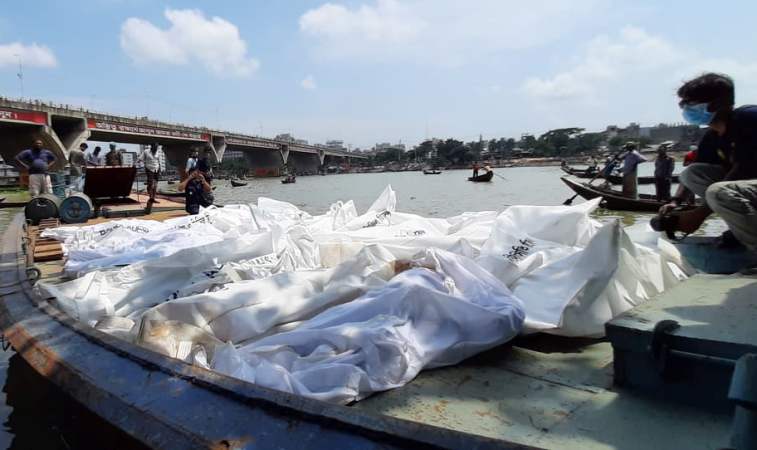 Bodies of 32 people have been recovered as a launch capsized in the Buriganga river after it was hit by another launch on Monday morning at Shyambazar area of Old Dhaka, .

Of the victims, 25 are men, five women and two children. However, the identities of the deceased could not be known immediately.
Divers recovered the bodies from the area this morning, said Duty Officer of Fire Service and Civil Defence Headquarters Rozina Islam.

Morning Bird, which was coming to Dhaka from Munshiganj, capsized in the river after it was hit by another launch Moyur-2 near Sadarghat launch terminal around 9:30am, said Shahadat Hossain, a duty officer of the fire service headquarters.

Here is the video footage of the horrible moment of collision between two launches.

The launch was reportedly carrying over 100 passengers, according to local police.

According to witnesses, around 40 passengers managed to swim ashore with the help of locals.

He said most of the passengers had been able to swim ashore. Fire service divers are working to rescue the missing passengers, he added.

However, Bangladesh Inland Water Transport Authority has formed a four-member committee to investigate the launch capsize and asked to submit report as soon as possible, said its Chairman Commodore Golam Sadeq.