The UK’s coronavirus death toll has increased by 67, reaching a total of 44,198.

The jump is lower than yesterday – when 137 fatalities were announced – and last Saturday, when 100 deaths were recorded.

NHS England has revealed 39 people have died from Covid-19 in English hospitals over the past day.

Welsh hospitals reported five new deaths, while Scotland did not have any.

Northern Ireland has yet to release its latest hospital death figures.

It comes as England reopens pubs and other businesses for the first time in three months today, sparking fears about the safety of staff and punters. 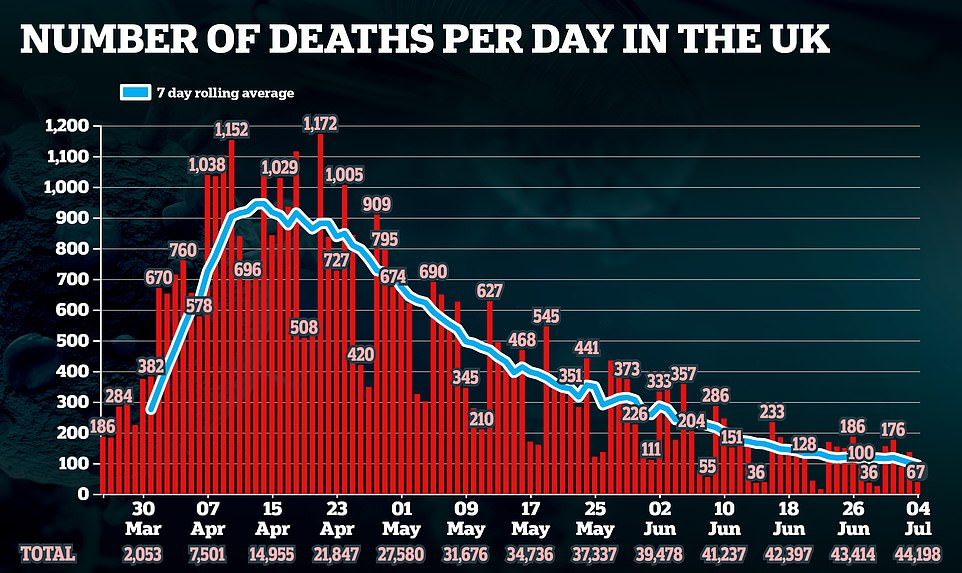 The Campaign for Real Ale (CAMRA) has revealed feedback suggesting up to half of the country’s pubs have not reopened on ‘Super Saturday’.

Chancellor Rishi Sunak  this morning welcomed the reopening of pubs.

He said: “The hospitality sector is a vital part of our economy and crucial to people’s livelihoods – Britain’s pubs and bars alone employ almost half a million people – which is why it’s such good news that so many people are able to return to work this weekend, helping us all to enjoy summer safely.”

However, some fear a spike in infections and scenes of disorder this evening as revellers let loose after three months of lockdown.

Marc Jones, Lincolnshire’s Conservative Police and Crime Commissioner, told BBC Radio 4’s Today programme: “I think there will always be some over-doing going on and I don’t think tonight will be any different from any other Saturday night, sadly, in that regard.

“I do think there is an element of decompression going on, particularly with younger people who have had some very responsible parents keeping them in over recent weeks.”