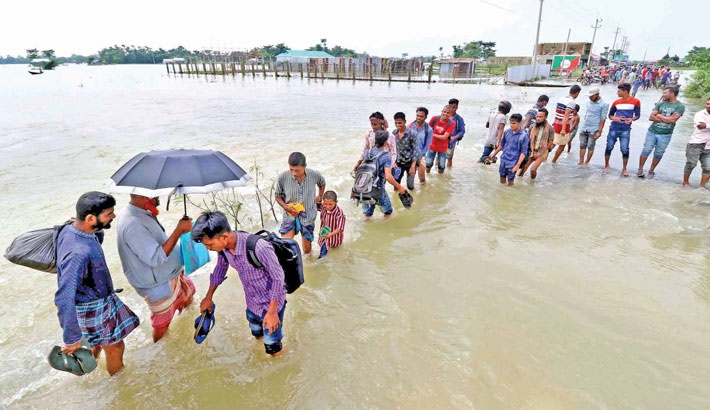 The flood situation has deteriorated further across the country as fresh areas were engulfed by floodwater due to a rise in water levels in all major river channels in the last few days.

So far, two people died—one from snake bites in Gaibandha and an eight-month-old baby girl after being washed away by floodwater in Lalmonirhat on Monday.

People are suffering much for acute shortages of food and pure drinking water as soon as the floodwater started receding. They are in want of flood relief.

So far 1,396,770 people of 283,691 families have been marooned in 401 flood-affected unions of 81 upazilas in 15 districts, according to the National Disaster Response Coordination Center (NDRRC). Fresh area of Nilphamari, Jamalpur, Kurigram, Lalmonirhat, Sylhet, Sunamganj, Natore, Gaibandha, Bogra, Netrokona, Feni, Habiganj, and Sirajganj were inundated further due to overflow of major rivers on the day.

As the flood inundated many low-lying areas in northern and northeastern regions over the past few days, marooned people have taken shelter on embankments, roads, highland and flood centres with their domestic animal and valuables.

Because of heavy rainfall and upstream water from bordering areas, the water flow Brahmaputra-Jamuna and Ganges-Padma river basin have been increasing rapidly on the day and it will continue over the next 72 hours, said Md Arifuzzaman Bhuiyan of Flood Forecasting and Warning Center (FFWC).

Padma River is in a rising trend and it will continue next 28 hours and it may cross danger level Vagakul, Mawa points in Munshiganj in the next 24 hours, it said.

River water was rising at 78 of the 101 points observed by the warning centre the morning.

Fourteen major rivers are flowing above their danger marks (DM) at 22 stations on Monday, according to FFWC.

The deceased was identified as Alifa Akhter, daughter of Anwar Hossain.

Atiar Rahman, chairman of Goddimari union Parishad, said the minor girl slipped into the floodwater and drowned early in the morning.

In Kurigram, floodwater inundated vast areas more than one lakh people in 56 unions of 9 upazilas of the district have been marooned. Flood water snapped road communication in some areas.

Some 438 shelters, including schools and madrasas, have been prepared and police have taken necessary steps to maintain law and order there, he said.

In Rangpur, people in three upazilas—Gangachara, Kaunia and Pirgachha—have been marooned as flash flood hit the area after the water level of Teesta rose.

In Sunamganj, people of all the 11 upazilas are in peril as the flash flood hit the region for the second time amid the pandemic.