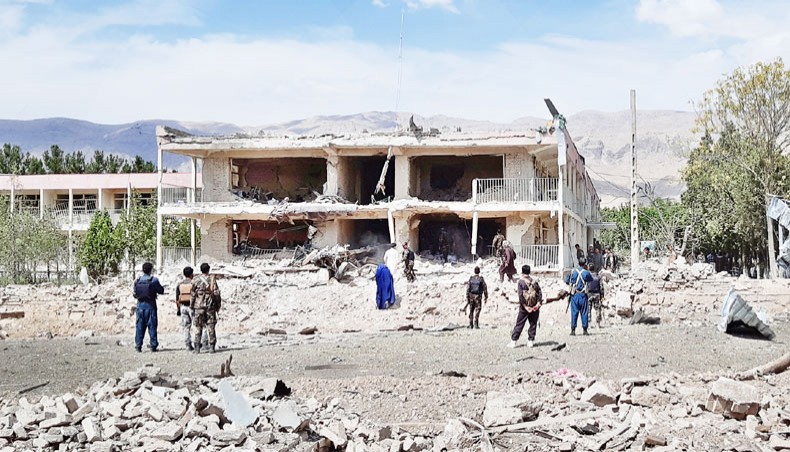 At least 11 security personnel were killed Monday in an attack claimed by the Taliban on a rural office of Afghanistan’s intelligence agency, officials said.

The insurgents said a suicide bomber detonated a device inside a car near the National Directorate of Security (NDS) while gunmen stormed the building in Aybak city in the north of the country.

Abdul Latif Ibrahimi, governor of Samangan province, told AFP 11 people were killed and 63 others, mostly civilians, were wounded in the explosion and gunfire.

“It was a huge explosion that broke all our windows,” said witness Haseeb, who only gave one name, a government employee who works near the NDS compound.

“Many people have been wounded by flying pieces of glass.”

President Ashraf Ghani condemned the “terrorist attack” and urged the Taliban to give up violence as the insurgents and government prepare to engage in peace talks.

“Resorting to violence and killing of the people to gain concessions in talks is the worst approach the Taliban has taken,” Ghani said in a statement issued by his office.

In recent months, the Taliban have carried out near-daily attacks against Afghan forces despite agreeing to talks with Kabul aimed at ending the long conflict.

In two separate attacks on Sunday blamed on the Taliban, at least 19 security personnel were killed, officials said.

A group of 12 soldiers and police were killed in a seven-hour battle with Taliban fighters who attacked their outpost in the northern province of Kunduz, Mohammad Yusouf Ayubi, the provincial council chief said.

Taliban forces have regularly attacked security forces in the northern province, often attempting to enter Kunduz city, which has briefly fallen twice to the militants in recent years.

In the second attack late Sunday in northeastern Badakhshan, seven policemen were killed in fighting with Taliban fighters, Nik Mohammad, spokesman to the governor said.

The Taliban claimed both attacks in Kunduz and Badakhshan.