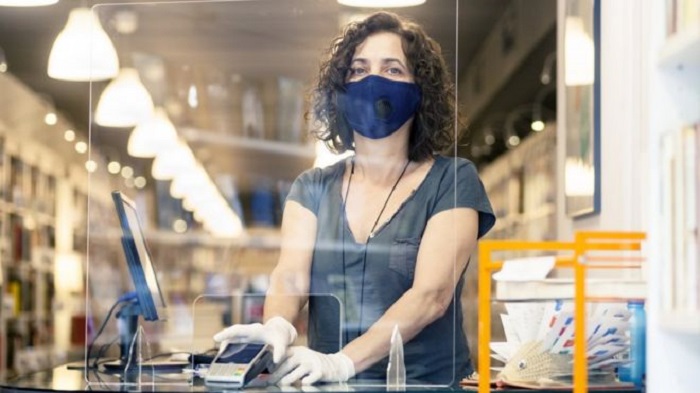 The number of workers on UK company payrolls fell by 649,000 between March and June, official figures indicate.

The overall jobless rate was unchanged but there are 47,000 more young people unemployed than there were a year ago.

Unemployment has not surged, as many feared, because large numbers of firms have put employees on the government-backed furlough scheme.

But economists say the full effect on employment will not be felt until the scheme ends in October.

The headline unemployment rate hasn’t budged since the lockdown was introduced. It stayed at 3.9% between March and May, unchanged on the previous three months.

The number of people claiming work-related benefits last month – including the unemployed – is also marginally lower at 2.6 million.

But because of the effect of the furlough scheme on the employment market, analysts say the number of hours worked per week is currently a truer reflection of the impact of the coronavirus crisis.

The Office for National Statistics (ONS) said that since the start of the pandemic, total weekly hours worked in the UK had fallen by a record 175.3 million, or 16.7%, to 877.1 million hours.

“This was the largest annual decrease since estimates began in 1971, with total hours dropping to its lowest level since May to July 1997,” the ONS added.

The number of Britons on payrolls – which means people employed by a company and does not include the self-employed – fell by 2.2% in June compared with March.

“The estimated number of people unemployed aged 16 to 24 years increased by 47,000 on the year, while other age groups remained steady,” the ONS said.

Many young people are employed in the hospitality industry, which was largely shut down from 23 March. The retail sector, another source of jobs for younger people, has also been hard hit by the lockdown.

The number of young new claimants who have signed on between March and June is 276,000 – more than doubling over three months.

BBC analysis has found there are now constituencies with nearly 20% of their young population on Universal Credit or Jobseeker’s Allowance – including Walton in Liverpool and south Blackpool.

Even affluent areas such as south-west Surrey, Henley and Windsor have seen a quadrupling in the number of young claimants under lockdown, though many of these are likely to have become eligible to claim as a result of being furloughed.

According to the Resolution Foundation, one-third of 18 to 24-year-old employees have lost jobs or been furloughed during the pandemic, compared to one in six adults above that age.

There are not many jobs around for anyone.

The ONS added that a larger than usual number of those losing their jobs were not currently searching for another one and were therefore economically inactive rather than unemployed, while some longer-term unemployed people had stopped looking for work.

A survey by the British Chambers of Commerce said 29% of businesses expected to cut jobs in the next three months. It called for a reduction in employers’ National Insurance contributions to protect businesses and jobs.

The government’s spending watchdog, the Office for Budget Responsibility, has warned that in the worst-case scenario, unemployment could rise to four million.

Danielle Skinner, 23, of Hollinwood, Oldham. was made redundant from her first job at the start of this month.

She had been in full-time work since November last year at a digital marketing firm, having been kept on after doing an apprenticeship.

At first, she was put on furlough. “But then, as things progressed and businesses started to make people redundant, it did give me an inkling that this was something possibly that was going to happen to me,” she told the BBC.

“I felt heartbroken personally, because I’d just started to get my career going and I felt like everything was just falling to pieces.

Despite her distress, Danielle says she doesn’t blame the company: “The business has to survive and if they didn’t take immediate action, then the business could have gone into administration and then there would be no jobs.”

She has already applied for 50 or so jobs and has only had one or two responses, which she finds very disheartening.

“It does get me down, I am struggling to find a job, but nevertheless I do try and remain positive and optimistic, thinking, ‘I am employable and someone one day will employ me and I’ll enjoy the job so much.'”

Business Secretary Alok Sharma said he had “enormous sympathy” for people who found themselves out of work.

“I know it’s going to be very, very difficult for lots of people as a result of this. The best thing we can do is continue to open up the economy in a phased manner and a cautious manner and get businesses up and running again,” he told the BBC.

He said the cost of inaction would have been “far greater” than the action the government had taken.

Bridget Phillipson, shadow chief secretary to the Treasury, said every lost job was “a personal tragedy now and a hammer blow to public finances in the long run”.

She accused the chancellor of taking a “blanket approach” rather than targeting the sectors worst affected by the crisis.