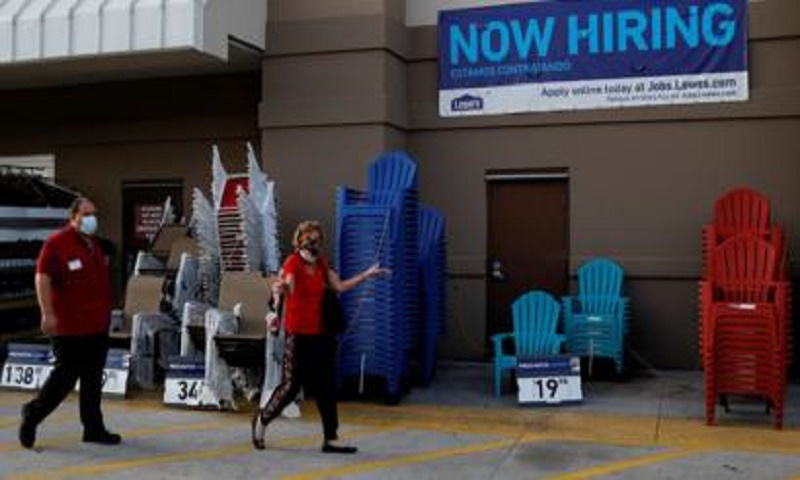 Hiring in the US slowed sharply in July as the country struggled to control the coronavirus pandemic.
Employers added 1.8 million jobs last month, down from a record 4.8 million in June.

The unemployment rate fell to 10.2%, continuing to improve from the high of 14.7% seen in April.

The figures reignited calls for Washington to approve further economic stimulus, though the slowdown was not as bad as many economists had feared.

“While this number exceeded our expectations, it still does not signal all is well,” said Kathy Bostjancic, chief US financial economist at Oxford Economics. “We’re far from a healed or good labour market.”

The job gains reported by the US Labor Department on Friday came from many of the sectors hit hardest by shutdowns, including restaurants, bars and retail outlets.

Economists have said this kind of hiring, happening as states around the country allow establishments to reopen, represents the “easy” part of a long recovery ahead, BBC reported.
“The initial bounce from widespread re-openings is now behind us. Further improvement will occur in fits and starts and depends on the course of the virus,” said Sarah House, senior economist at Wells Fargo.

Since February, the US has lost more than 12 million jobs and seen unemployment spike from a roughly 50-year-low of 3.5%.

In the three months to the end of June, the country’s economy suffered its sharpest quarterly contraction in more than 70 years of record-keeping, shrinking at an annual rate of 33% or nearly 10% year-on-year.