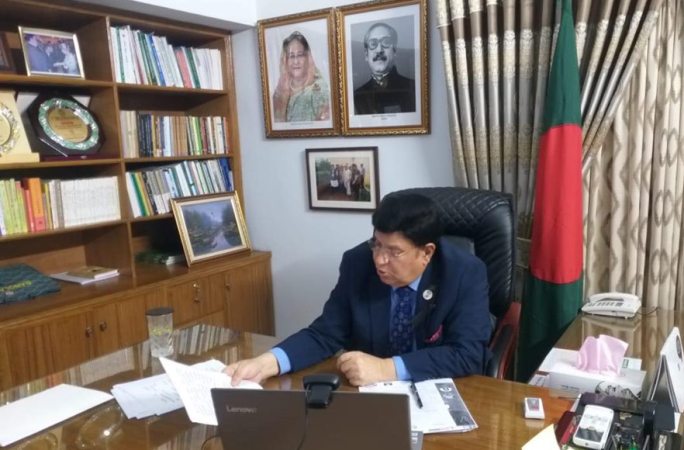 Foreign Minister AK Abdul Momen has emphasised on the engagement of young people at the local, national and global levels in the context of the phenomenal global challenges such as the COVID-19 pandemic and menace of climate change.

Momen came up with the call while attending in the Climate Dialogue on Young People Leading Coastal Resilience to Climate Change & Launching Ceremony of Coastal Youth Action Hub” virtually on Wednesday.

“Today, in the context of the phenomenal global challenges such as the COVID-19 pandemic and menace of climate change, the engagement of young people at the local, national and global levels is more important than ever,” he said.

He thanked ‘YouthNet for Climate Justice’ for organising such a timely event in line with the theme of this year’s International Youth Day which is “Youth Engagement for Global Action.

Paying glowing tributes to Bangabandhu and his family members, the foreign minister said, August is the painful month as the Father of the Nation and the members of his family were martyred in this month. But their sacrifice only strengthens our resolve to achieve the ‘Sonar Bangla’ as dreamt by our Father of the Nation.

“We have a glorious history of the youth in our country. From our struggle for liberation under the great leadership of our Father of the Nation Bangabandhu Sheikh Mujibur Rahman to the heroic sacrifice during the War of Liberation in 1971, our youth repeatedly showed us the right path. Under the visionary leadership of Prime Minister Sheikh Hasina, Bangladesh has made tremendous achievements in involving and empowering the youth and our development has become role model for many other developing countries,” he said.

“We all hear that the youths are our future. Actually they are also our present. The history proved that it was not possible to overcome the global challenges and to open new horizons of opportunities without the involvements of the youth. And climate change is the most critical global challenge of our times. We are experiencing our increasing vulnerability to climate change which is affecting agriculture, endangering food security, causing sea-level rise and the accelerated erosion of coastal zones and river erosion thus increasing the intensity of natural disasters and triggering extinction of the species, uprootings our people from their homes and dwellings,” he added.

While talking about Bangladesh climate challenge, Momen said that following the trend of the last three decades, Bangladesh will see an average temperature increase of 1.0 Celsius by 2030 and 1.4 Celsius by 2050 considering 1990 as the base year. This is translating to many challenges including frequent natural disasters, degradation of forest areas, wetlands, and agricultural land leading to a plurality of socio-economic issues. By 2050 one in every 45 people in the world and one in every 7 people in Bangladesh will become displaced by climate change.

“We are talking about adaptation measures and Bangladesh has emerged as a global leader for adaptation. But we must remember that there is a limit to adaptation and we cannot just increase our adaptation while the polluting countries do not adopt the necessary mitigation efforts,” he said.

Mentioning that the solutions won’t come only from conference rooms and official platforms of the government officials, scientists, big corporations and politicians, he said as the future belong to the youth, they have to fight and claim for their future.

“Youths are usually uncompromising, innovative and connected. The International Telecommunications Union (ITU) estimates that young people worldwide are nearly two times more networked than the global population as a whole. So, social media can be an important tool in empowering youth, strengthening their cause and conveying to the decision makers that current business as usual policiesare unacceptable. We’ve all seen how young people took the forefront in solving complex problems. Most of the Forbes’ billionaires started as young entrepreneurs starting from Bill Gates, Steve Jobs, Sergei Brin, Jawaid Aziz, Salam khan, Fahim Saleh,  Larry Page and Mark Zuckerberg to name a few,” Momen said.

Mentioning that the Bangladesh Prime Minister will participate at the 26th Conference of Parties (COP26) to be held in Glasgow, Scotland next year, he said that she will not just to represent Bangladesh, but all the 48 most vulnerable developing countries that are members of the Climate Vulnerable Forum (CVF).

“Climate Change is affecting us all, so we all have to change our mindset, and more than that, our way of living. We produce too much and we also consume too much. Actually we are over spending from our future generations’ account. As youths you can bring that change. We have to turn concern into action. We should try to ensure, “No food waste, no food loss,”’, he added.

“Having the menaces of the COVID-19 and fast aggravating climate change situation, we are surely passing one of the most critical patches in the history of mankind. We need to be mindful that climate change and biodiversity loss would generate social and economic damage far larger than those induced by COVID-19. Prioritizing short-term economic growth and efficiency over long-term resilience will surely have huge societal costs. An effective engagement of the young people in our recovery plan will add great value,” the FM added.