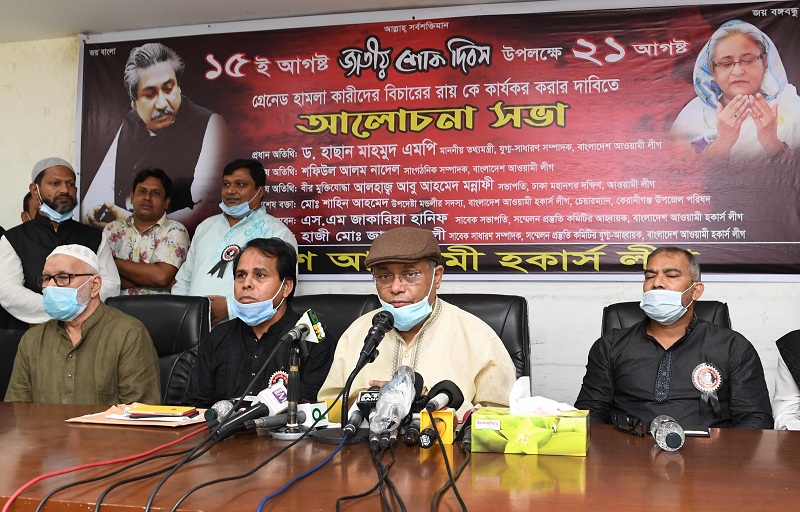 Dubbing the August 15, 1975 massacre and the August 21, 2004 grenade attack as linked, Information Minister Dr Hasan Mahmud  said on Monday general Zia and Begum Zia both walked on the path of politics of killing.

“The assassination of Bangabandhu on August 15 in 1975 and the August 21, 2004 gruesome grenade attack are linked the persons who didn’t want the independence of Bangladesh had killed Bangabandhu,” he said.

The information minister made the comments while addressing a discussion marking the National Mourning Day and demanding expediting of verdict of the August 21, 2004 grenade attack organized by Awami Hawkers League at Jatiya Press Club here.

In the beginning of his speech, the information minister paid rich tribute to Father of Nation and other martyrs of his family, martyrs of the August 21, 2004, including Shaheed Ivy Rahman.

Hasan said the evil forces staying at home and abroad and the defeated forces, who didn’t want the independence of Bangladesh and had failed to face Bangabandhu politically, killed Bangabandhu through conspiracies on August 15, 1975. In the same way, the August 21, 2004 grenade attack was carried out to kill Awami League President and incumbent Prime Minister Sheikh Hasina and to annihilate the leadership of AL, he added.

He said the conspirators not only killed Bangabandhu, rather they killed most of his family members, including 10-year-old Sheikh Russel, Sheikh Fazlul Haque Moni, Sheikh Abu Naser and Abdur Rab Serniabat, who was a cabinet member. Actually, they killed Bangabandhu to make the Awami League devoid of leaders and Khandaker Mosthaq and Ziaur Rahman were the main kingpins of the massacre, said Hasan, also AL joint general secretary.

On the other hand, the information minister said Ziaur Rahman’s son Tareque Rahman was the mastermind and key planner of the August 21, 2004 massacre, and it meant the family were involved in the two killings.

He said trial of Tareque Rahman for the August 21 killing was held and he was sentenced to life imprisonment. But, Begum Khaleda Zia was the prime minister at that time and the attack was carried out with her knowledge and approval, he added.

Hasan said Tareque Rahman perpetrated the massacre as per the approval of the then prime minister Begum Zia. For this, a demand has been raised to bring Begum Zia under book after accusing her in the case, he added.

He said when the demand has been raised, then the BNP leaders are talking nonsense and telling that ‘the attack was carried out to demolish BNP’, which is really ridiculous.

He said Begum Zia chose the path of killing following her husband Ziaur Rahman who was the kingpin of the Bangabandhu killing. “Begum Zia carried out the grenade attack through her son to perpetuate her power. And this is the reality,” Hasan added.