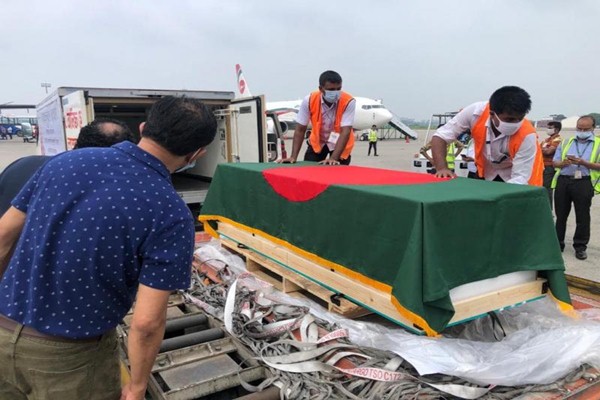 The body of war hero Chitta Ranjan Dutta, Bir Uttam, widely known as CR Dutta, reached Dhaka on Monday morning from the US where he passed away on August 25 at the age of 93.

The coffin of commander of sector number four during the Liberation War arrived in Dhaka’s Hazrat Shahjalal International Airport (HSIA) after 8:30am on Monday, airport sources said.
Earlier, an Emirates SkyCargo flight left for Dubai from Florida with Dutta’s coffin at 6 pm (local time) on Saturday, said his son-in-law Pradeep Dasgupta.

Dutta’s daughter Barrister Chayanika Dutta accompanied his body back to Bangladesh from Dubai.

Meanwhile, Dutta’s son and two other daughters have left New York for Dhaka on a Qatar Airlines flight on Saturday night. They are scheduled to reach Dhaka at 2:30 pm on Monday.

A 1001-member national citizens’ committee was formed with Major General (rtd) KM Shafiullah, one of the sector commanders during the Liberation War, as the convener and journalist Shahriar Kabir as member-secretary to pay last tributes to Bir Uttam CR Dutta in proper manner.

CR Dutta, Bir Uttam, passed away at a Florida hospital in the US at around 9 am (Bangladesh time) on August 25 (Tuesday) at the age of 93.