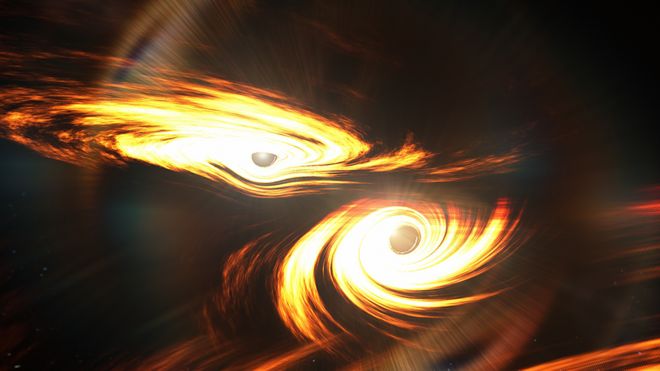 Imagine the energy of eight Suns released in an instant.

This is the gravitational “shockwave” that spread out from the biggest merger yet observed between two black holes.

The signal from this event travelled for some seven billion years to reach Earth but was still sufficiently strong to rattle laser detectors in the US and Italy in May last year.Researchers say the colliding black holes produced a single entity with a mass 142 times that of our Sun.

This is noteworthy. Science has long traced the presence of black holes on the sky that are quite a bit smaller or even very much larger. But this new observation inaugurates a novel class of so-called intermediate-sized black holes in the range of 100-1,000 Sun (or solar) masses.

The analysis is the latest to come out of the international LIGO-VIRGO collaboration, which operates three super-sensitive gravitational wave-detection systems in America and Europe.

What is a black hole?
# A black hole is a region of space where matter has collapsed in on itself

# The gravitational pull is so strong that nothing, not event light, can escape

# How these monsters – found at galaxy centres – formed is unknown

# Black holes are detected from the way they influence their surroundings

The collaboration’s laser interferometer instruments “listen” for the vibrations in space-time that are generated by truly cataclysmic cosmic events – and on 21 May, 2019, they were all triggered by a sharp signal lasting just one-tenth of a second.

Computer algorithms determined the source to be the end-stage moments of two in-spiralling black holes – one with a mass 66 times that of our Sun, and the other with 85 solar masses.

The distance to the merger was calculated to be the equivalent of 150 billion trillion km.

“It’s astounding, really,” said Prof Nelson Christensen from the Côte d’Azur Observatory in France. “This signal propagated for seven billion years. So this event happened ‘just before halftime’ for the Universe, and now it’s mechanically moved our detectors here on Earth,” he explained to BBC News.

# Gravitational waves are a prediction of the General Theory of Relativity

# It took decades to develop the technology to directly detect them

LIGO-VIRGO fire lasers into long, L-shaped tunnels; the waves disturb the light detecting the waves opens up the Universe to completely new investigations.

The involvement of an 85-solar-mass object in the collision has made collaboration scientists sit up because their understanding of how black holes form from the death of a star can’t really account for something on this scale.

Stars, when they exhaust their nuclear fuel, will experience an explosive core collapse to produce a black hole – if they’re sufficiently big. But the physics that’s assumed to operate inside stars suggests the production of black holes in the particular mass range between 65 and 120 solar masses is impossible. Dying stars that might yield such entities actually tear themselves apart and leave nothing behind.

If the science is correct on this point then the most likely explanation for the existence of an 85-solar-mass object is that it was itself the result of an even earlier black hole union.

And that, believes Prof Martin Hendry, from Glasgow University, UK, has implications for how the Universe evolved.

“We’re talking here about a hierarchy of mergers, a possible pathway to make bigger and bigger black holes,” he said. “So, who knows? This 142-solar-mass black hole may have gone on to have merged with other very massive black holes – as part of a build-up process that goes all the way to those supermassive black holes we think are at the heart of galaxies.”