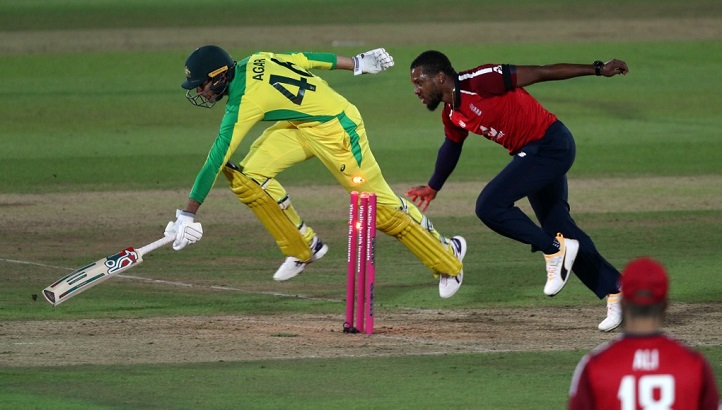 Tom Curran held his nerve as England beat Australia by two runs in a final-ball thriller to win the first Twenty20 international at Southampton on Friday and go 1-0 up in a three-match series.

Australia, in their first competitive match for nearly six months because of the coronavirus, were making light work of a target of 163 while captain Aaron Finch (46) and David Warner (58) were putting on 98 for the first wicket.

Chris Jordan, in his 50th match at this level, conceded just four runs in the penultimate over that ended with him running out Ashton Agar.

A target of 15 off six balls became five off one.

But Marcus Stoinis, having hit a six off Curran earlier in the over, couldn’t hit another six needed for a win or the four that would have tied the scores and taken the match into a Super Over.

“We managed to get the ball talking a bit, Adil (Rashid) taking those two important wickets to get into that middle order and get it exposed a little bit.”

Meanwhile Finch said either he or Warner should have seen Australia home.

“We knew that England were going to keep coming hard and they executed really well,” he said.

“I’d probably be more critical of myself and Davey, who got us off to good start and neither of us pushed on to make a match-winning contribution.”

Finch was soon into his stride with a pulled four off express fast bowler Jofra Archer — playing his first white-ball international since bowling the decisive Super Over in England’s 50-over World Cup final win over New Zealand at Lord’s last year.

And on a ground where he made 156 in a Twenty20 international against England in 2013, Finch struck leg-spinner Adil Rashid — arguably the hosts’ best current T20 bowler — for 14 runs in three balls, with a huge straight six followed by two extra-cover driven fours.

England didn’t take a wicket until the 11th over when Finch was unable to clear Jordan at mid-off after lofting Archer.

Rashid then gave England hope with two wickets in five balls on his way to 2-29, with Smith caught in the deep before all-rounder Glenn Maxwell (one) slapped him straight to Morgan at short extra-cover.

Archer then bowled Warner off his pads to end the left-hander’s 47-ball innings featuring four fours.

Australia now had two new batsmen on nought and Alex Carey had made just one when he was bowled by fast bowler Mark Wood — one of three 50-over World Cup winners recalled by England, along with Jos Buttler and Archer, following the drawn T20 series against Pakistan.

Earlier, Australia held England to 162-7 after Finch won the toss.

England were on course for a large total while opener Buttler was making 44.

But Dawid Malan’s 66 — the left-hander’s eighth score of fifty or more in just 14 T20 international innings — was the only other contribution of note.

Maxwell removed dangerman Morgan for just five when he skyed Maxwell and Smith, running round from long-on, held a good catch under the Ageas Bowl floodlights. Malan completed a 37-ball fifty before he holed out off Richardson.

The bio-secure, behind closed doors, series continues at Southampton on Sunday.