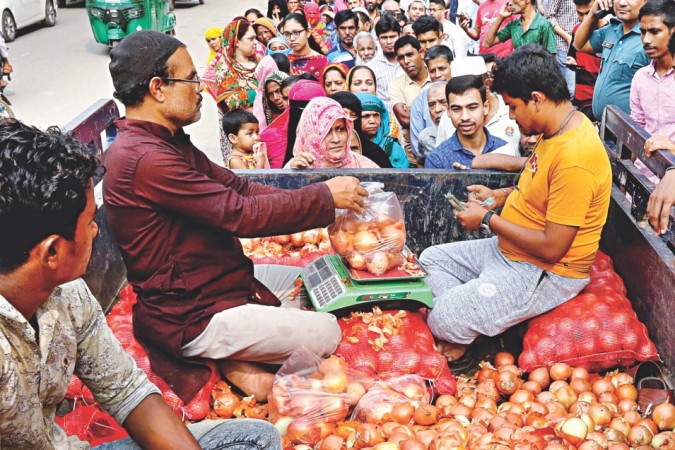 The Trading Corporation of Bangladesh (TCB) has started selling onions at a subsidised rate of Tk 30 per kg across the country in efforts to keep the increasingly volatile market of the essential stable.

The state-run agency began the selling of onion on Sunday morning.
Apart from the onion, state-run Trading Corporation of Bangladesh (TCB) will some other essential items, including sugar, lentil pulses and soybean oil, at different points in the capital and elsewhere in the country till October 31.

In September-November of 2019, onion prices skyrocketed to an all-time high (Tk 280-300 a kg) amid an export ban by India, one of the major onion sourcing countries for Bangladesh.

A buyer can buy maximum two kilogrammes of onion, sugar and lentil. Sugar and lentil will be sold at Tk 50 and Tk 50 per kg respectively while a buyer can take maximum 5 litres of soybean oil at Tk 80 per litre, said a release.

The TCB will also sell the essential items in Chattogram through 10 trucks while seven trucks in Rangpur, five in Mymensingh, five in Rajshahi, seven in Khulna, five in Barishal, five in Sylhet, five in Bogura, five in Cumilla, three in Jhenaidah and three in Madaripur and two trucks in the remaining 52 districts.

Commerce Minister Tipu Munshi on Thursday said they had been taking preparations to import the highest-ever quantity of onion this year to keep the market stable.
“All the government departments are alert to avert any recurrence of last year’s chaos and TCB will start selling onion in the open market from next Sunday,” he said.