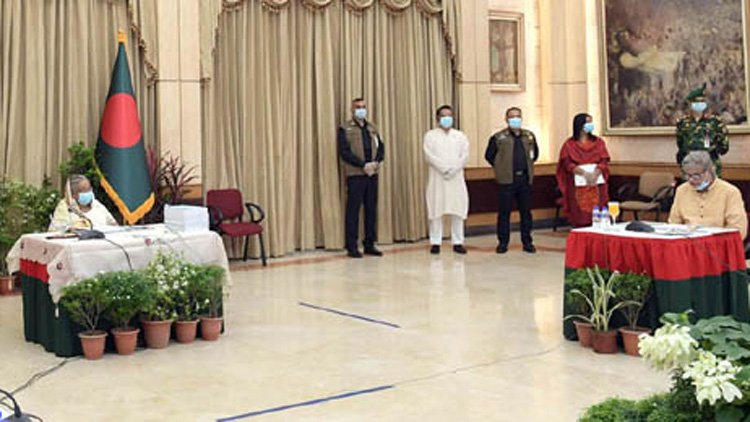 The Executive Committee of the National Economic Council (ECNEC) on Tuesday approved a total of four projects involving an overall estimated cost of Taka 534.34 crore, including a new scheme for protection and development of local species of fish and snails with Taka 202.04 crore.

The approval came from a meeting of the ECNEC held with its Chairperson and Prime Minister Sheikh Hasina in the chair.

The premier along with Finance Minister AHM Mustafa Kamal and Planning Minister MA Mannan joined the meeting virtually from her official Ganabhaban residence while the ministers, state ministers and others concerned joined the meeting from the NEC Conference room in the city’s Sher-e-Bangla Nagar area.

Briefing reporters after the meeting, the planning minister said, “A total of four projects were approved today involving an overall estimated cost of Taka 534.34 crore. Of the total project cost, Taka 440.94 crore will come from the government of Bangladesh while the rest Taka 93.40 crore as project loan.”

Of the approved four projects, one is new while three others are revised projects.

He said Prime Minister Sheikh Hasina was highly excited over the incorporation of snails in this project as she mentioned that slacked lime (Chun) is prepared from snail shells which is usually consumed with betel leaf and also is a source of calcium.

Mannan said the premier was also optimistic about the cultivation of oysters as pearls are being extracted from those.

“The larger and ultimate goal of the government is to preserve the local species,” he added.

The Department of Fisheries under the Ministry of Fisheries and Livestock will implement the project by June 2024 at some 49 upazilas under 10 districts of the South-Western region of the country.

Planning Commission member Md Zakir Hossain Akand said once the project is implemented, it would help boost the production of snails in the country alongside saving the sweet water fishes from extinction. He informed that this is for the first time a project has been undertaken incorporating snails.

He mentioned that fish sanctuaries would be created under the project while some pilot projects would also be undertaken under this project.