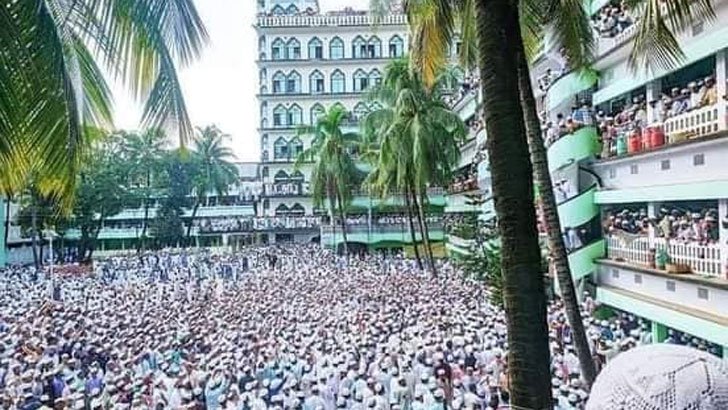 The namaz-e-janaza of Hefazat-e-Islam chief Allama Shah Ahmed Shafi was held on the Hathazari Madrasah premises after Zohr prayers on Saturday.

Several thousand people attended the janaza of the religious scholar that took place around 2:00pm.

He will be buried at the madrasah’s graveyard later in the day.

Security has been tightened in four upazilas of Chattogram to avoid any untoward situation over the burial of Hathazari Madrasah rector and chief of Hefazat-e-Islam Allama Shah Ahmed Shafi.

Besides, seven magistrates have been deployed to maintain law and order in the upazilas from Saturday morning. Of these, four magistrates will be on duty in Hathazari upazila, said Md Omar Faruk, an assistant commissioner at the Deputy Commissioner’s office.

Students of the madrasah have been agitating  since last Wednesday last.

Anas Madani, son of Allama Ahmad Shafi, director general of the madrasah,  was withdrawn on Wednesday night in the face of demands of the students.

Later, he fell sick and was was admitted to Chittagong Medical College Hospital. When his condition deteriorated, he was taken to Dhaka by an air ambulance  on Friday afternoon.