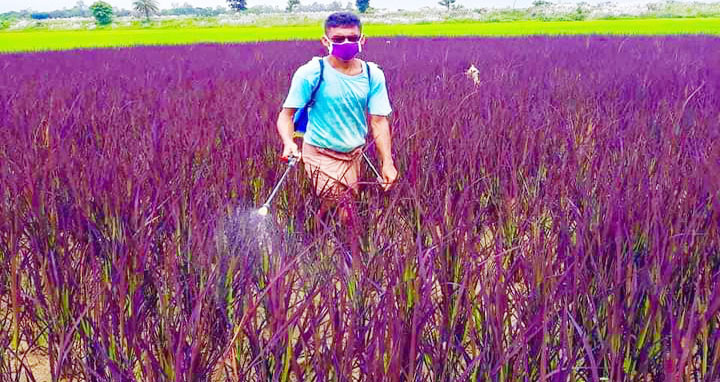 Purple paddy was harvested by a local farmer named Saleh Ahmed for the first time in Moulvibazar’s Srimangal upazila, creating a huge response among the local farmers.

Saleh Ahmed is a resident of Titpur in Ashidron UP of that upazila who said if the yield is good, he will cultivate this paddy in more lands in future.

Saleh Ahmed said that he became interested in cultivating this variety of paddy as he firstly noticed cultivation of Purple paddy in his his cousin’s house in Moulvibazar. Later, he collected seeds through his brother and cultivated this paddy in his area in collaboration with the Department of Agriculture.

Mr. Ahmed named this paddy after Subarna Iri Dhan. He added that after planting the seeds in the land, he did not have to take care in much while fertilizer needed in less. On the other hand, many people are coming to see his paddy field, he hoping to get higher yield than other rice.

According to the Department of Agricultural Extension, the new crop is called “Purple Paddy” which was harvested for the first time in Sundarganj upazila of Gaibandha in the country in 2018. This rice is full nutrition while the color of paddy is golden and the color of rice is purple. The diseases and insect attacks are found much less in this rice of Ufshi variety as well as it takes 145-155 days for paddy to ripen from planting. The yield is also quite good than other varieties such a total of 55-60 maunds of paddy cane get from per acre.

Nilufar Yasmin Monalisa Sweety , Upazila Agriculture Officer, said, “The Purple paddy is not foreign rather that it’s our native variety of rice. It has been cultivated in other districts before, this time for the first time in Srimangal. A farmer has cultivated experimentally. If the yield is good, the produced paddy will be kept in the form of seeds.”