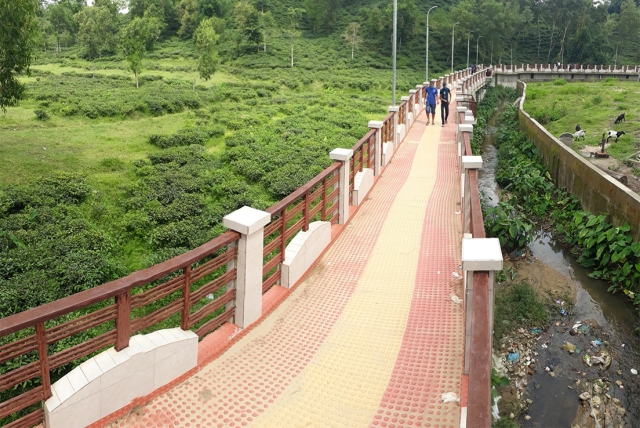 A good number of people, mostly young, gather in the Goabari area in Sylhet to spend leisure on the natural site surrounded by a tea garden on the hillocks every day.

The number of visitors went up recently as the Sylhet City Corporation (SCC) constructed a walkway on the bank of the Kalibari Chhara (a natural stream attached to the Tarapur Tea garden area flowing to the Surma river) in ward 8.

The SCC however, had to evict the illegal occupants from the part of the stream before constructing the eye-catching one km walkway while another half km is still under construction.

It may be stated here that as many as nine natural streams, locally called ‘Chhara’ and three other large canals, originating from the hillocks run down to the Surma river, flowing through the city. It gave a different view for the city as well.

Sources informed the SCC has been implementing a project worth 2.36 million taka for protecting the said natural streams through constructing retaining wall and walkway.

SCC mayor Ariful Haque Chwodhury said due to the Covid -19 pandemic, works on the said project are being delayed. The much-desired project had been taken up for letting the city dwellers enjoy natural beauty, he added, already they had started getting benefits. Sufficient lighting will also be set up on the walkway.

Recovering the natural streams in the city is a big challenging task, said Moksud Ahmed of the city’s Ambarkhana area who was visiting the area yesterday afternoon.

2020-09-21
Mr. Admin
Previous: Is it possible for Type 2 diabetes to turn into Type 1?
Next: PM for all-out preparations to fight possible second wave of COVID-19