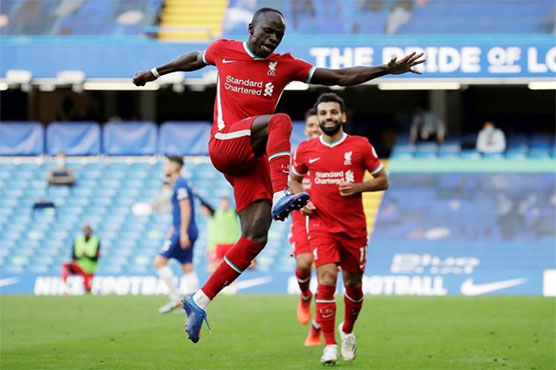 Mane was involved in the turning point at Stamford Bridge as the first clash between Premier League title contenders this season swung Liverpool’s way.

In first half stoppage-time, Jordan Henderson picked out Mane’s run behind Christensen and the Denmark defender responded by rugby-tackling the Senegal star to the ground.

Referee Paul Tierney initially booked Christensen, but VAR told him to consult the pitchside monitor and he changed his decision to a red card.

Mane grabbed his first goal of the season in the 50th minute as he met Roberto Firmino’s cross with a thumping header after eluding Reece James’ slack marking.

Mane was gifted his second goal as Chelsea keeper Kepa Arrizabalaga made a hash of trying to play out from the back, allowing the Liverpool forward to intercept and slot into the empty net.

It was the latest costly blunder from Kepa, who was dropped twice by Chelsea manager Frank Lampard last season despite his status as the world’s most expensive keeper.

Lampard will be relieved that Chelsea are reportedly close to signing Rennes’ Senegal international Edouard Mendy as he looks to replace Kepa.

“It was a clear mistake and Kepa accepted that,” Lampard said.

Thiago Alcantara made his Liverpool debut at half-time after his move from Bayern Munich, but the Spain midfielder conceded a 74th-minute penalty with a foul on Timo Werner.

After their chaotic 4-3 win over Leeds on the opening weekend, this was a return to the kind of dominant display Liverpool produced so often en route to their first English title for 30 years last season.

“After the red card, the second half is a different game,” said Liverpool boss Jurgen Klopp. “We kept the ball rolling, let them run, scored the goals. Everybody had a hand in the result.”

While Chelsea have spent £200 million ($258 million) on new signings in a bid to close the gap on the champions, Liverpool remain streets ahead of the Blues at present.

“Every team that’s been successful has had time, has had a process and our process starts here,” said Lampard.

Bale has returned to Tottenham on a season-long loan from Real Madrid seven years after he left the north London club.

Danny Ings put Southampton ahead in the first half, but Son equalised before the break and scored three more in the second half, with each of his goals coming from Kane assists.

Kane, who hit the back of the net twice in the first half only to have them ruled out for offside, capped a swaggering display with his second goal of the season.

“Son was on fire and for me Harry Kane was the man of the match, what he did for the team,” said Mourinho, whose side had lost their league opener against Everton.

“With him dropping back and connecting the game between the lines for Sonny to attack, the space they created was a problem they couldn’t resolve.”

Leicester moved to the top of the table on goal difference ahead of Arsenal, Everton, Crystal Palace and Liverpool after they came from behind to beat Burnley 4-2.

After a disappointing end to last season to miss out on Champions League football, Brendan Rodgers’ side have responded well with two convincing wins to start the new campaign.

Chris Wood fired the visitors into a 10th-minute lead at the King Power, but Harvey Barnes sparked the fightback before Erik Pieters’ own goal, James Justin and Dennis Praet’s blistering finish handed the Foxes all three points.

Graham Potter’s side raced into a two-goal lead after just seven minutes at St James’ Park thanks to the brace from French striker Maupay.

Aaron Connolly grabbed the third for Brighton, who had Yves Bissouma sent off after his raised boot caught Jamal Lewis in the face.