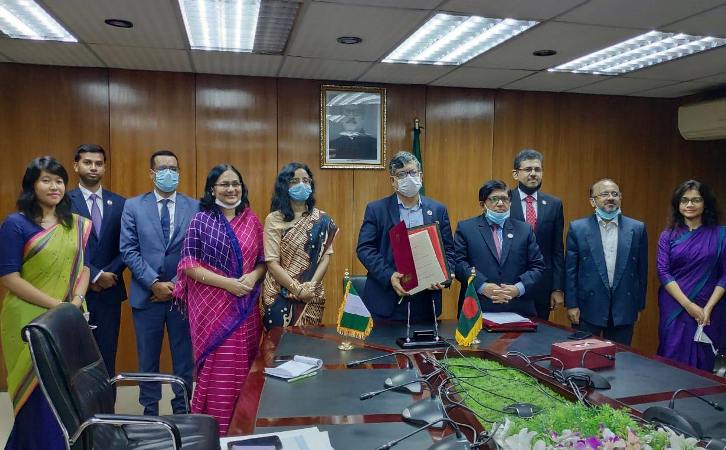 Foreign Secretary of Bangladesh Ambassador Masud Bin Momen and Permanent Secretary of the Ministry of Foreign Affairs of Nigeria Ambassador Mustapha Lawal Sulaiman signed the instrument on behalf of their respective Ministry.

Both of them expressed hope that the signing of the MoU would enable the two Foreign Ministries to hold regular consultations in order to review the progress of bilateral relations and contribute to strengthening the bond of friendship between the two countries in future, said the Foreign Ministry in Dhaka.

Ambassador Masud, in his statement, stressed on the exploration of the untapped potential in political, economic, cultural and educational areas and proposed to establish meaningful collaborative relationship in this regard.

Foreign Secretary mentioned that Bangladesh would like to pursue more trade and investments cooperation with Nigeria- the largest economy of Africa. He also urged for mutual efforts for concluding the pending agreements with Nigeria.

Foreign Secretary expressed deep appreciation for the kind gesture of Nigeria for the recent release of a Commemorative Stamp by the Nigerian Postal Service (NIPOST) to mark the birth centenary of the Father of the Nation Bangabandhu Sheikh Mujibur Rahman which was unveiled by the Foreign Ministers of both the countries.

On his part, Ambassador Mustapha expressed the hope to work closely with Bangladesh to steer bilateral cooperation between the two friendly countries.

While applauding the impressive and sustained economic growth of Bangladesh, Nigerian Permanent Secretary emphasized on exchange of government and private level visits between the countries.

Both Bangladesh and Nigeria agreed to hold Foreign Office Consultations (FOC) on a regular basis.