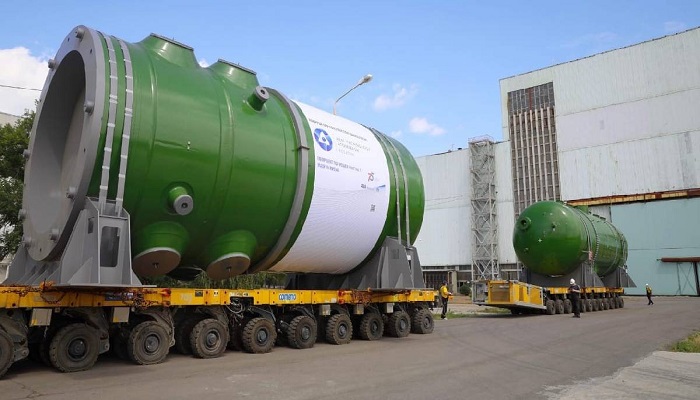 The Volgodonsk branch of JSC “AEM-technology” (a part of the machine-building division of Rosatom–“Atomenergomash”) has shipped the set of steam generators for the first Rooppur nuclear power plant.

The first item was dispatched two months ago, together with the reactor pressure vessel and two more steam generators were shipped in September for under construction Rooppur Nuclear Power Plant (RNPP), according to a press release received on Thursday.
It said the last of the four steam generators was transported from the plant to the special birth, where three items with the total weight of more than 1,000 tonnes, will be loaded onto a barge.

The equipment will be first transferred to Novorossiysk, and then the item will be transported to Bangladesh by sea. The sea route will be about 14,000 km.

The main equipment of the reactor facility for Unit No.1 of Rooppur NPP has been shipped from the plant site, the release said.

The steam generator belongs to products of the first safety class. Its diameter is 4 meters; length is about 14 meters and the weight of the equipment is 340 tonnes.

Rooppur NPP is designed and constructed as per the Russian project. The power plant will consist of two units with the capacity of 1,200 MW each, equipped with VVER reactors of the 3+ generation.