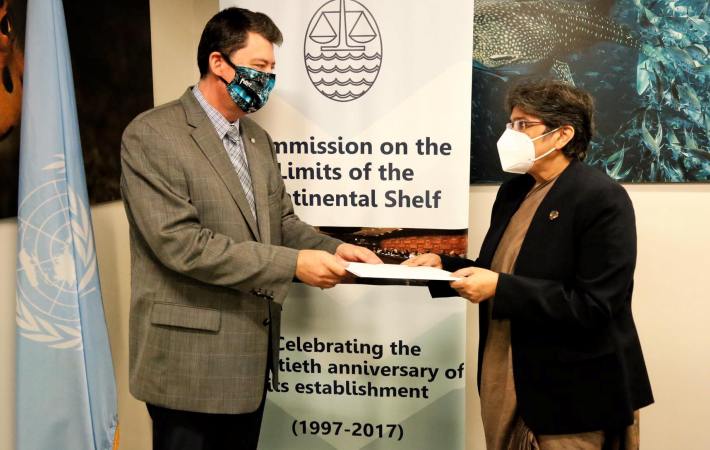 Ambassador Rabab Fatima, Permanent Representative of Bangladesh to the United Nations, delivered the amended submission to the DOALOS on behalf of the Government due to travel restrictions for the COVID-19 Pandemic.
Earlier, Bangladesh lodged a Submission to the Commission on February 25, 2011 in accordance with the Article 76, paragraph 8 of the United Nations Convention on the Law of the Sea (UNCLOS) 1982, concerning the limits of the continental shelf beyond 200 nautical miles from the baseline from which the breadth of the territorial sea is measured.

However, subsequently Bangladesh’s maritime boundary was determined up to the limits of the Continental Shelf by the International Tribunal for the Law of the Sea (ITLOS) in the Dispute concerning delimitation of the maritime boundary between Bangladesh and Myanmar in the Bay of Bengal in 2012 and Permanent Court of Arbitration (PCA) in the Matter of the Bay of Bengal Maritime Boundary Arbitration between Bangladesh and India in 2014.

Therefore, the Ministry of Foreign Affairs has prepared the revised submission with their relentless efforts and finally submitted the amended submission for further proceedings by the CLCS which supersedes in its entirety the Submission deposited on 25 February 2011.

This amendment will not affect the position of the Submission in the queue of submissions received by the Commission which is 55 in number, said the Foreign Ministry today (Friday).

Following this, it is expected that a sub-commission will be formed; a presentation on this amended submission would be made before the Commission by the Bangladesh UNCLOS Technical Team, and then Bangladesh will receive a ‘Recommendation’ from the Commission.

After the maritime boundary issues were resolved with neighbours (Myanmar and India), Bangladesh requires the ‘Recommendation’ to fulfill the obligation of Article 76 of the United Nations Convention on the Law of the Sea (UNCLOS), 1982.