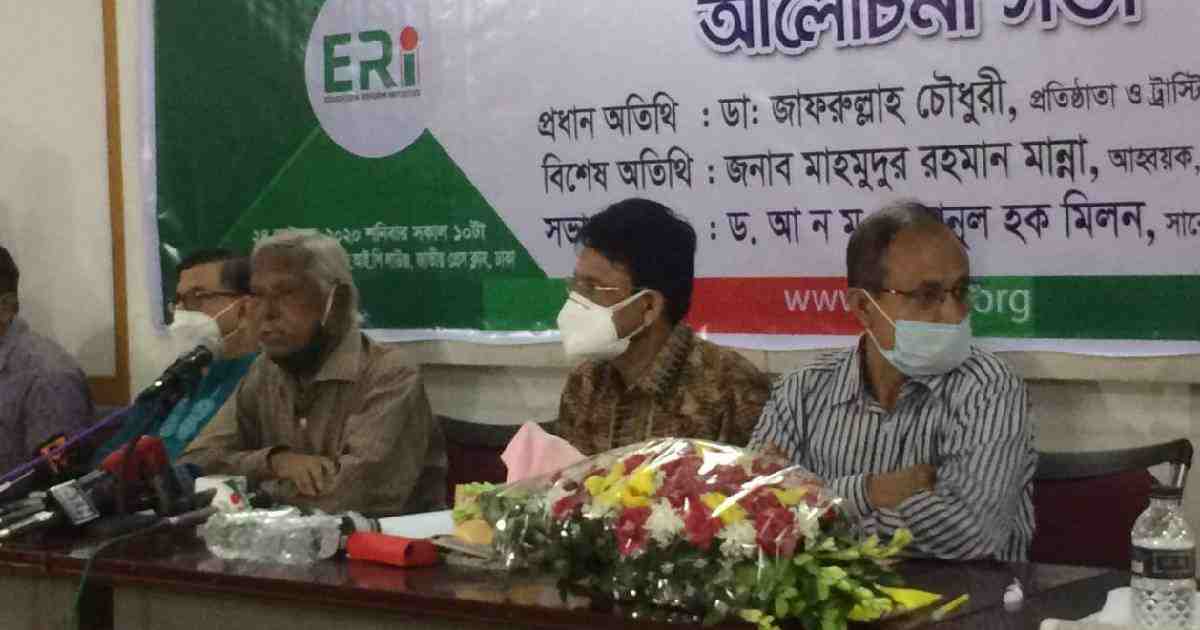 Speakers at a discussion in the capital on Saturday opposed the government’s decision of giving students auto-promotion without holding HSC and other examinations, saying it is part of a ploy to destroy the country’s education system and the nation.

They urged the government to review its decision and work out an effective mechanism like taking exams on a small scale for properly assessing the merits of the students.

Education Reform Initiative (ERI) arranged the programme titled ‘Auto-Pass in the Exams During Corona and the Present and Future of Education’ at the Jatiya Press Club.

Speaking at the programme, Gonoshasthaya Kendra founder Zafrullah Chowdhury said being a doctor current Education Minister Dr Dipu Moni decided to give students auto-pass persuaded by others. “There’s no reason to adopt the auto-promotion system.”

He said one reason can be there behind giving students auto-promotion to destroy the country’s education system and force them to go to other countries like India for quality education. “Lakhs of our students have now been going to India for studies in recent years. So, unwarily they hold some sort of love for India.”

Zafrullah, a freedom fighter, said India now earns more than fifty times higher benefits a year by doing business in Bangladesh than it spent on feeding one crore Bangladeshis during eight months of the country’s Liberation War in 1971.

Referring to newspaper reports, he said India received $128 billion from Bangladesh as remittance in 2018.

Zafrullah said around 10 lakh Indians, including 5 lakh officially, have been working in Bangladesh.

Despite having different degrees, he said the students in the country remain unemployed as Bangladesh’s education quality has been falling gradually. “The auto-promotion option has been adopted to destroy the education system and quality further.”

Zafrullah said when everything has reopened after the coronavirus shutdown there is no reason to keep the educational institutions closed and cancel exams on the pretext of the corona. “This’s nothing but a ploy to destroy the nation. This government did it as it got auto-promotion without any test during 2014 and 2018.”

He said it is true that the government has been established by adopting the auto-pass system. “But why have the opposition parties long been following this system? The largest opposition party BNP and other parties of good persons like CBP are also exercising it as their leaders are holding posts based on an auto-system. When auto-pass is exercised in politics, people lose their confidence in political parties. We all should think about it.”

The freedom fighter also said as leaders are getting party posts without any test, they are also not taking any risk and engaging in any fight to establish people’s rights. “Political parties must stop the practice of political dynasty and making leaders through auto-pass. They must hold councils regularly and ensure democratic practice within their parties to get people’s support. Auto-pass shouldn’t be there anywhere, be it in politics or in examinations.”

The Gonoshasthaya Kendra founder said the prices of all medicines could be halved within 15 days had there been a pro-people government. “Medicine companies are not only making huge profits but also robbing people of their pockets.”

He said when a government and a Prime Minister have been installed through the auto-pass, they will naturally think about auto-promotion of students instead of thinking about any suitable solution. “The country is passing through a serious political crisis as all parties here follow the auto-pass system.”

“Auto-promotion is a matter of shame. Those who’re supposed to get the auto-pass certificates in 2020, they’ll have to bear it as a stigma throughout their whole life. The students should raise their voice against it,” Manna said.

He said the county’s education, economy, women and people are not safe in the hands of the current regime as it ‘usurped’ power. “How they have become a government, Prime Minister, Minister and MPs by grabbing power. We don’t accept them and we must continue our fight and take to the streets to ensure their fall.”

Former state minister for education Ehsanul Haque Milon said auto-pass cannot be accepted as it will only harm the nation and the country’s education sector.

“The government has adopted the auto-promotion system without thinking about other alternatives. The exams can be held on a limited scale. We can also find out a proper assessment method like other countries in the world,” he observed.