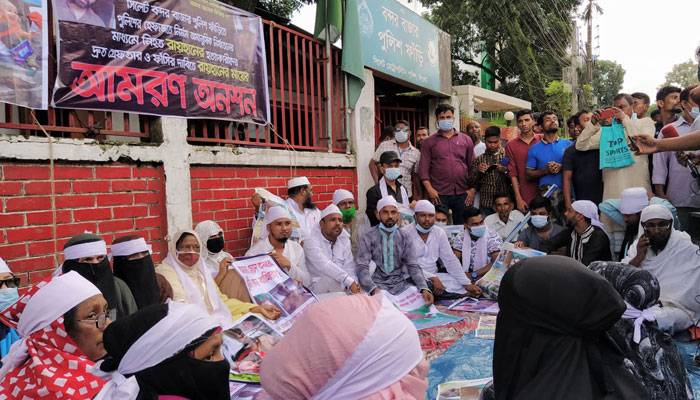 Mother of Raihan Ahmed, who was allegedly tortured to death in Sylhet city’s Bandarbazar police outpost, has started hunger strike demanding capital punishment for all the police personnel involved with the incident.

Rayhan’s mother Salma Begum and his relatives began the hunger strike in front of the outpost on Sunday morning.

Urging government to take all arrested accused in remand, she said that they will continue their hunger strike until all the culprits are arrested.

She demanded arrest of Akbar Hossain Bhuiyan, former in-charge of the police outpost.

On October 11, Raihan Ahmed, 34, a resident of Akharia in Sylhet city, was beaten to death in police custody, said the family of the victim.

Besides, the authorities on October 12  suspended four policemen, including the in-charge of Bandarbazar Police outpost Sub-Inspector Akbar Hossain, in connection with the death of a man ‘in police custody’ in Sylhet.

Three policemen have been withdrawn in this connection on the same day. They are Ashek Ali, Kutub Ali and Sajib Hossain.

Police rejected the allegation and said Raihan was caught by locals of Kastghar area during  a robbery and was lynched.

Besides, the case has been transferred to the Police Bureau of Investigation.

After primary investigation, they found some policemen guilty in this connection.