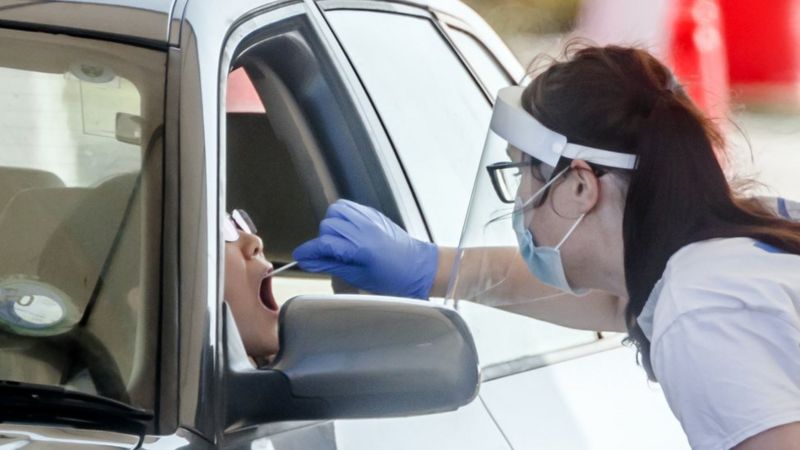 The two-week quarantine period for contacts of those who test positive for Covid-19 could be cut to 10 or seven days, amid criticism of Test and Trace.

Writing in the Telegraph, Conservative MP Sir Bernard Jenkin said a “vacuum of leadership in Test and Trace” was affecting compliance.

Tests could be offered to people after a week of isolation, the paper said.

Northern Ireland Secretary Brandon Lewis told the BBC the government would be “led by the science” on the issue.

And Prof Sir Ian Diamond, a member of the government’s Scientific Advisory Group for Emergencies (Sage), added there was “work going on” to look at the length of self-isolation period and “certainly it has been discussed at various times”.

Research by King’s College London suggested just 10.9% of those traced as contacts of someone with Covid-19 remained at home for the full quarantine period.

Earlier this month, Transport Secretary Grant Shapps said he was “very hopeful” of reducing the amount of time people needed to spend in quarantine on arrival in the UK from abroad and this could be done by testing them a week later.

Sir Bernard, chairman of the Commons liaison committee, said public consent and co-operation with England’s system was “breaking down”.

He added there should be a “visible and decisive” change, with a senior military figure put in charge of the system.

Baroness Dido Harding, currently at the helm, should be “given a well-earned break” so she and others could “reflect on the lessons learned so far”, he wrote in the paper.

“There is a spaghetti of command and control at the top, which is incapable of coherent analysis, assessment, planning and delivery,” he added. “People lack faith that there is a coherent plan.”
A Department of Health and Social Care (DHSC) spokesperson said NHS Test and Trace had contacted more 1.1 million people and asked them to self-isolate.

“Dido Harding and her leadership team – drawn from the military, public and private sectors – have built the largest diagnostic industry the UK has ever seen,” they said.

“It is the equivalent of building an operation the size of Tesco in a matter of months. We need to improve in areas and we are very much focused on that, but we should be talking it up not down.”

Last month, it was announced that former Sainsbury’s chief executive Mike Coupe would be taking over as director of Covid-19 testing at England’s NHS Test and Trace agency.
More than 20,000 tracers were recruited by the service, but many have complained they were given little or nothing to do.

Figures for the week ending 14 October reveal that just 15.1% of those who were tested received their results within 24 hours – dropping from 32.8% in the previous week.

The figures also showed a fall to 59.6% in the proportion of close contacts reached of people who tested positive.

‘Led by the science’

According to Sage, at least 80% of contacts would need to isolate for it to work properly.

Meanwhile, cabinet minister Mr Lewis told the BBC’s Andrew Marr Show that “teams were looking” at whether the self-isolation period cut be cut from 14 days but he added that “any final decision on this will be led by the science and we’re not in a position to make on a decision on that just yet”.

Prof Diamond told the same programme that identifying “the optimal times for self-isolation is critical” because it was an “incredibly important part of the way in which we will control this virus”.