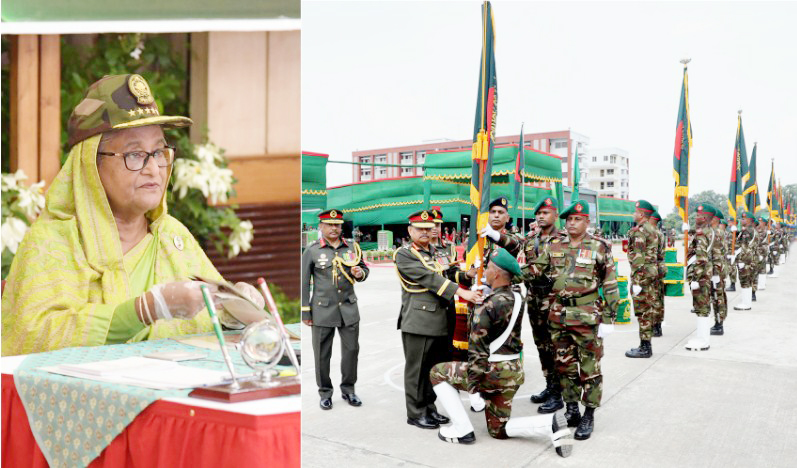 Prime Minister Sheikh Hasina on Wednesday asked the army to gain greater strength to defend Bangladesh in case of any internal or external attack on the country though the nation doesn’t want war against any country.

“We have to achieve more strength as we can remain prepared to face any attack on the country,” she said while virtually raising flags of the eight units and organizations of the Bangladesh Army from her official Ganabhaban residence.
The premier said that they want peace and friendship rather not enmity and war, referring to the foreign policy adopted by the Father of the Nation, “Friendship to all malice to none” in this regard.

“We want to forward towards prosperity following the path of peace. We want to make Bangladesh a developed country both in economically and socially maintaining friendship to all,” she continued.

The prime minister directed members of Bangladesh Army to keep a constant vigil to face any “internal and external threats” for safeguarding the country’s constitution and sovereignty.

Calling Bangladesh Army as an “asset” of the country and a “symbol” of the confidence and the trust of the people, the premier also asked its members to be more “professionally-efficient” and “welfare-minded” with social and religious values.

“Bangladesh Army is our asset and a symbol of confidence and trust of the people…so, you will have to be more competent, efficient, honest and welfare-minded being imbued with social and religious values to achieve desired standard of professionalism,” she said.

A smartly turned out contingent of Bangladesh Army gave salute to the Prime Minister through a spectacular parade.
Chief of Army Staff General Aziz Ahmed spoke at the function from the Sheikh Hasina Cantonment, Lebukhali, Patuakhali.