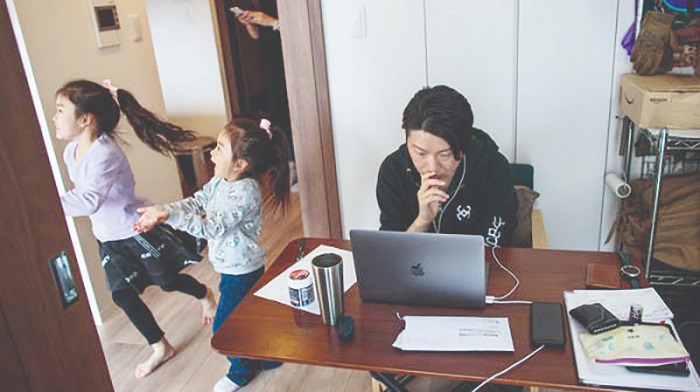 Working from home in Britain is expected to quintuple by 2025, intensifying a trend turbo-charged during the coronavirus pandemic, according to a study by consulting firm Deloitte published Friday.
After surveying 90 financial directors drawn from some of Britain’s biggest companies, it found the global health crisis had “triggered fundamental and lasting changes in business”.
As many as 98 percent of those questioned predicted a rise in home-working in the coming years, while more than three-quarters expect the government’s current order to work from home to continue through the first half of this year.
Almost 60 percent expected the curbs on going to workplaces to be permanently lifted in the third quarter, as the country’s Covid-19 mass-vaccination programme progresses.
The government imposed a third stay-at-home lockdown this week after a surge in infections linked to a new strain. It intends to review the measures in mid-February.
Meanwhile, almost all chief financial officers (CFOs) surveyed expect personal taxes to increase, with nearly two-thirds predicting higher taxes on businesses and an increased state role following huge interventions to prop up the economy.
“By and large, this massive forced experiment in home-working has been very successful,” Ian Stewart, chief economist at Deloitte, told the Daily Telegraph.
“Sectors have been able to maintain quite a high degree of effectiveness operating from home.”
Deloitte UK chief Richard Houston said even after the pandemic, CFOs anticipate greater home-working, diversification of supply chains and investment in technology.
“CFOs are optimistic about operating in this changing world, with a return to growth expected this year,” he said in a press release, while stressing most CFOs were keeping money back to guard against a prolonged lockdown and business uncertainty.
Houston noted a Christmas Eve trade deal between Britain and the European Union ended one element of uncertainty and was preferrable to a “no-deal” Brexit.
But he added CFOs “also recognise the challenges that leaving the EU may pose in the years ahead”, noting the deal had little provision for professional and financial services.
“These high-productivity sectors are major UK successes and make vital contributions to jobs and prosperity,” Houston said, noting businesses urgently needed additional clarity on key issues.
2021-01-09
Mr. Admin
Previous: Queen Elizabeth, husband receive COVID-19 vaccine
Next: Covid: UK coronavirus deaths surpass 80,000 and total cases top 3,000,000